The wallpaper has a magnetic lining. 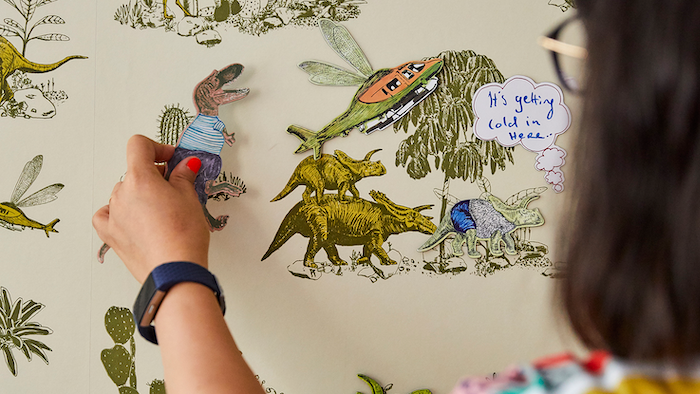 And she owes it to dinosaurs and Little Red Riding Hood.

The London-based Sian creates handmade, sometimes fairytale-inspired illustrations on wallpaper with magnetic linings, and sells it with three magnets of a customer's choosing for interactive fun. A dinosaur motif is her best-seller among a dozen designs that also include an enchanted forest and tropical blooms.

"It was inspired by my final year thesis on Little Red Riding Hood. I was interested to see how the story evolved over the centuries," said the 35-year-old Sian, a graduate of the art school Central Saint Martins, in London. "I wanted to create interactive magnetic wallpaper that would let people tell their stories using a set of characters."

She was awarded $15,000, which she said she'll put back into her Etsy shop, SianZeng.

Etsy, the online marketplace for handcrafted goods, opened the competition to sellers around the world. The competition drew thousands of contenders. Other winners are based in the United States, Greece and Israel.

"We're a global platform and I think sometimes people forget that," she told The Associated Press. "The Etsy Design Awards are really about the celebration of our incredible community of over 2.3 million sellers that we have around the globe."

Sian began her Etsy shop with other handmade goods in 2009, soon after her college graduation.

"Being young graduates, it was difficult to showcase our work anywhere," she said. "Within the first week we sold well."

The competition's other winners, in specific design categories, received $1,000 each.

A self-taught woodworker, Justin Nelson of the Etsy shop FernwehWoodworking, was recognized for inventive decor driven by his Sling Chair. It has a frame of hand-shaped American walnut and a hand-stitched leather seat and back. It was the first chair the Bend, Oregon-based former Marine ever created.

Molly Goodall, whose Etsy shop is called LittleGoodall, was the signature style winner for a sky-blue, wool-blend, felt girls' coat featuring a rainbow and fluttery gilded butterflies. There's also a faux fur collar and epaulets. The McKinney, Texas-based Goodall was inspired to launch her shop of whimsical children's apparel when her 2-year-old son refused to wear his hood during winter. She created a felt lion coat to motivate him.

Etsy's earth-friendly winners are an Athens, Greece, couple, Vicky Moudilou and Stam Guinis of the Etsy shop EatingTheGoober. They create clothes, accessories and bags out of discarded tires and upcycled fabric. The judges recognized the pair for slide sandals made from recycled materials that come with wide interchangeable uppers.

The other winners include Tel Aviv, Israel-based Naomi Shiek of the Etsy shop WoodlandPapercuts, and architects Alejandro and Sara Pijuan, who create midcentury-inspired pet furniture in their garage, selling on Etsy at PijuanDesignWorkshop.