It's been over a decade in the making. 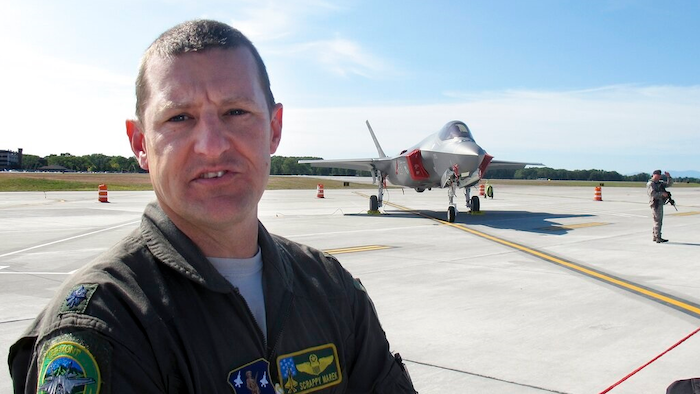 SOUTH BURLINGTON, Vt. (AP) — The first two of an eventual 20 F-35 jets arrived Thursday at the Vermont Air National Guard base in South Burlington, the first Guard unit to receive the next-generation fighter.

Guard members and friends clapped as the planes flew over the airport for the first time Thursday afternoon, doing several flyovers after the three-hour flight from the factory in Fort Worth, Texas.

The delivery follows years of work and planning, as well as missions in the Guard's previous aircraft, F-16s that flew continuously for weeks over New York after the Sept. 11 attacks and in combat tours in Iraq and elsewhere in the Middle East.

"Bringing the F-35 to Vermont secures our future for decades, and our country needs this airplane," Col. David Smith, the commander of the 158th Fighter Wing, the new home to the F-35s, said after the planes arrived.

But for some members of the community, the arrival of noisier aircraft marks the failure of yearslong efforts to keep the Air Force from delivering the planes to an airport that sits amid residential neighborhoods and industrial complexes in the middle of Vermont's most populous county.

Rosanne Greco, the former chair of the South Burlington City Council and a retired Air Force colonel, said she supported basing the plane in her home city until she learned by reading the Air Force's environmental impact statement about how noisy the F-35 is and what she feels are the dangers of having a new, unproven weapon system at a suburban airport.

"All I had to do was read what the Air Force said about the impact it would have," Greco said. "The evidence was overwhelming it would have a very negative effect on close to 7,000 people" who live near the airport.

Smith said prior to Thursday's arrival that the Air National Guard understands the concerns. The Guard has modified traffic patterns the planes will use and checked the takeoff times to minimize noise disruptions, he said.

As for safety, he said, more than 400 F-35s have been delivered so far, and the planes have accumulated more than 200,000 flying hours.

"It's really important to us to do everything we can to mitigate the impact on the community," he said.

The Air Force describes the F-35 as its fifth-generation fighter, combining stealth technology with speed and agility. Different models are being built for the Air Force, Navy and Marines and are being sold to U.S. allies across the world.

It is also the U.S. military's most expensive weapons system of all time, with an estimated total cost of $1.5 trillion over the expected half-century life of the program. The model of plane that will be based in Burlington cost about $94 million each.

Vermont, and the Guard, are at the forefront of learning how to make the best use of the new airplanes, he said.

"Ten years from now, we need to have figured out how to use this F-35 thing, and it's going to be the lead as the wings fall off some of these old airplanes," Bryan said.

Vermont Air Guard Lt. Col. Tony "Scrappy" Marek, one of the pilots who flew to Burlington on Thursday, said flying the F-35 is similar to the F-16 he used to fly.

"It's been over a decade in the making," Market said. "It's a remarkable airplane. ... It does truly amazing things, and I'm really excited to be able to fly it."