An investigation was launched after an uproar over the MIT Media Lab's close ties to Epstein that led to lab director's resignation. 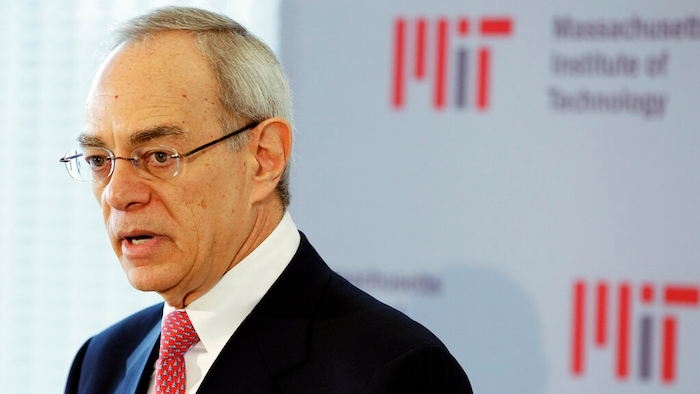 In this May 16, 2012, file photo, L. Rafael Reif addresses a news conference after he was announced as the 17th president of the Massachusetts Institute of Technology in Cambridge, Mass. President of the Massachusetts Institute of Technology Reif has ordered an independent investigation after a report about ties between Jeffrey Epstein and a prestigious research lab at the school, he wrote in a letter to the university community Saturday, Sept. 7, 2019.
AP Photo/Stephan Savoia, File

CAMBRIDGE, Mass. (AP) — The president of the Massachusetts Institute of Technology acknowledged Thursday that he signed a letter thanking the late, disgraced financier Jeffrey Epstein for a donation to a professor.

President L. Rafael Reif called the letter to Epstein a "standard acknowledgment letter" in a statement to the university community posted on its website.

"I apparently signed this letter on August 16, 2012, about six weeks into my presidency. Although I do not recall it, it does bear my signature," he said.

Reif's revelation came out of an independent investigation by Goodwin Procter, the outside law firm retained to investigate the facts surrounding MIT's ties to Epstein.

The investigation was launched after an uproar over the MIT Media Lab's close ties to Epstein that led to lab director's resignation.

Director Joi Ito's resignation came after The New Yorker reported that the Media Lab had a more extensive fundraising relationship with Epstein than it previously acknowledged and tried to conceal the extent of the relationship.

Reif also said that Goodwin Procter's investigation found that senior members of MIT's administration were aware of gifts the lab received between 2013 and 2017 from Epstein's foundations.

"Goodwin Procter has found that in 2013, when members of my senior team learned that the Media Lab had received the first of the Epstein gifts, they reached out to speak with Joi Ito," Reif wrote.

"He asked for permission to retain this initial gift, and members of my senior team allowed it. They knew in general terms about Epstein's history — that he had been convicted and had served a sentence and that Joi believed that he had stopped his criminal behavior."

Epstein, 66, killed himself in jail Aug. 10 while awaiting trial on sex trafficking charges. Federal prosecutors in New York had charged him with sex trafficking and conspiracy, alleging he sexually abused girls over several years in the early 2000s.

The independent investigation is ongoing.