Flying Motorcycle Tops Out at 150 MPH

But be prepared for a little sticker shock. Also, MIT's Mini Cheetah does backflips and researchers study bungee jumper brains.

MIT researchers have created the Mini Cheetah, a smaller 20-pound version of the Cheetah 3, that can (among other things) do a backflip.

While the Mini Cheetah tops out at 5.5 mph, the team recently put the robot through the paces on campus. The timing seems particularly fitting as the robot performed many of the same agility drills that athletes are currently going through at the NFL combine: the shuttle run, sprint, and 3-cone drills (without the cones).

Of course, for the sake of research, they kick the Cheetah despite my previous warnings. In one particular test that foreshadows the fall of man, one researcher finally kicks the Cheetah over only to watch it reset, roll over and stand up. Really, it's incredibly impressive.

During the next test, the researchers threw the Cheetah to gauge its ability to land, and then they had it perform a few backflips for a crowd of spellbound students. Surprisingly, the team released footage of the project’s many missteps and failures.

According to the researchers, each leg is powered by three motors, which provide a large range of motion, and the high-torque, low-inertia design allows the robot to execute fast, dynamic maneuvers and make high-force impacts on the ground without breaking gearboxes or limbs.

Next, the team will work on a more agile and even more catlike robot. Essentially, they want the robot to land on its feet no matter how hard or far you throw it.

Researchers from the Charité University of Medicine in Berlin are studying the the brains of bungee jumpers to improve human-machine interfaces.

According to the researchers, bungee jumpers experience a measurable increase in brain activity about one second before he/she decides to jump. The moment is called the 'Bereitschaftspotential' or readiness potential. This experiment was the first time the data was successfully captured outside of a lab and in extreme conditions.

The readiness potential is an electrical voltage shift in the brain. It indicates that a voluntary act is imminent, and it occurs before the person is even aware of their conscious decision to execute this movement.

The researchers strapped electrode caps to the bungee jumpers to take readings before they plunged about 630 feet. The two participants made 30 jumps from the Europa Bridge in Austria.

What is interesting about the study is that the brain activity recorded during the bungee jumps was the same as data recorded from jumps from a height of just one meter. That's right, they had both test subjects also jump 30 times from a height of one meter. So, even though you are afraid in the moments before a potentially life-threatening action, the fear doesn't impact the readiness potential.

Next, the data will be used to develop devices that could give paraplegics and stroke survivors a little more freedom by translating brain activity into control commands for robots or other high-tech devices.

Flying Motorcycle Tops Out at 150 MPH

Today in new ways to die, I bring you The Speeder, the new flying motorcycle from Los Angeles-based Jetpack Aviation.

Powered by four turbojet engines, The Speeder is capable of speeds eclipsing 150 mph and a max altitude of 15,000 feet. While it runs on diesel or kerosene, it still can only fly for 22 minutes at most. The low end is 10 minutes, so get where you're going quickly. The max pilot weight is 240 pounds and will certainly impact flight times. The flying motorcycle also includes a fly-by-wire control system that self-stabilizes  so you don’t roll and fall out of the sky.

Now, you need to put your deposit down on these things quickly, because the company only has plans to build 20 recreational versions of the speeder before dedicating production to the military.

The exclusivity comes with a steep price point. The pre-order will cost you $10,000 (refundable) which isn't bad. However, the final aversion is going to cost you at least $380,000, but hey it comes with a free hat and a keychain.

According to the company's military site, they are currently test flying a 1/3rd scale Speeder prototype.

JetPack Aviation has been in the micro personal vertical take off and landing (VTOL) aircraft business for 10 years. You may remember their early work, the JetPack that the CEO flew around the Statue of Liberty.

The best part is that you might not even need a pilot's license to fly this thing, and if you’re going 150 mph, there’s a good chance you won’t feel anything anyways. 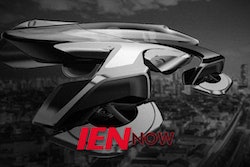 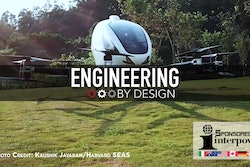 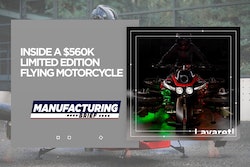 Getting a $560k Motorcycle to Fly