Dennis Muilenburg's compensation last year was worth $23.4 million, including a $13.1 million bonus and $7.3 million in stock awards.

David Koenig
In this Oct. 29, 2019, file photo Boeing Company President and Chief Executive Officer Dennis Muilenburg appears before a Senate Committee on Commerce, Science, and Transportation hearing on 'Aviation Safety and the Future of Boeing's 737 MAX' on Capitol Hill in Washington. Boeing’s new chairman gave Muilenburg a vote of confidence Tuesday , Nov. 5, and said the chief executive is giving up any bonus this year.
AP Photo/Andrew Harnik, File

Boeing's new chairman gave embattled CEO Dennis Muilenburg a vote of confidence Tuesday and said the chief executive is giving up any bonus this year.

David Calhoun said the Boeing board believes Muilenburg "has done everything right" and is positioning the Chicago company to return the 737 Max to service after two accidents killed 346 people.

A flight-control system called MCAS pushed the nose of both planes down before crashes in Indonesia and Ethiopia. Boeing, which kept any explanation of MCAS out of pilot manuals, is now revamping the system to make it easier for pilots to override.

"Dennis didn't create this problem, but from the beginning he knew that MCAS should and could be done better, and he has led a program to rewrite MCAS to alleviate all of those conditions that ultimately beset two unfortunate crews and the families and victims," Calhoun said on CNBC.

Last week, several members of Congress challenged Muilenburg to resign or at least give up pay. Muilenburg's compensation last year was worth $23.4 million, including a $13.1 million bonus and $7.3 million in stock awards.

Boeing has said recently that it expects the Federal Aviation Administration to approve its changes to the Max before year-end. Those changes include new retraining material for pilots and tying MCAS to a second air-direction sensor at all times so that a single sensor failure won't push the nose down, as happened before both crashes.

Muilenburg has conceded, however, that fixing MCAS has taken far longer than Boeing expected. U.S. airlines aren't planning on using the plane until at least January or February, and it could take longer in other parts of the world, where regulators want to conduct their own reviews of Boeing's work.

Boeing is under investigation by the Justice Department and Congress. Muilenburg testified last week before two congressional committees, and lawmakers questioned him closely about messages in which a Boeing test pilot seemed to raise concerns about MCAS and said he "unknowingly" lied to regulators, and a production manager said speeding up the Max assembly line raised safety issues.

"Mr. Muilenburg's answers to our questions were consistent with a culture of concealment and opaqueness and reflected the immense pressure exerted on Boeing employees during the development and production of the 737 MAX," Peter DeFazio, D-Ore., chairman of the House Transportation Committee and Rick Larsen, D-Wash., chairman of the aviation subcommittee, said in a letter to colleagues Monday.

Boeing Co. fired the head of its commercial airplanes division last month, a move that was seen as a reaction to production problems with several planes, not just the Max. Muilenburg, who became CEO in July 2015, was stripped last month of the chairman's title.

The board gave that job to Calhoun, a senior executive at the private equity firm Blackstone who previously led General Electric's jet-engine business and was reported to be in the running for Boeing CEO more than a decade ago. 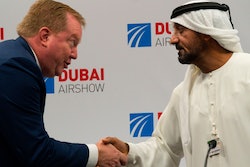 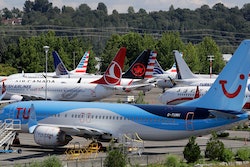 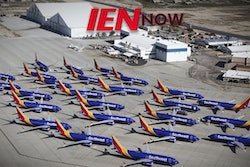