The version of its iconic polo shirt is also dyed with a process that uses zero water. 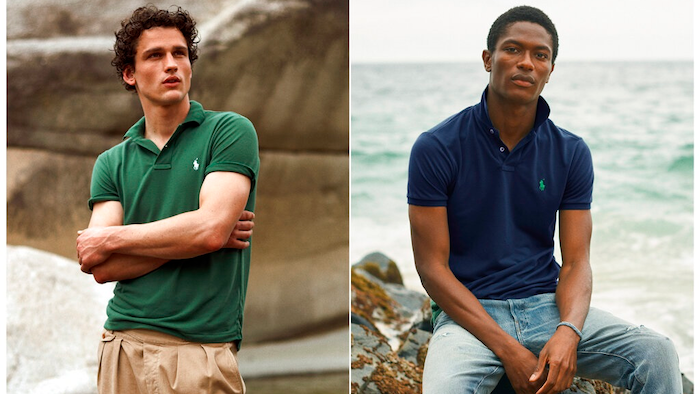 This combination of photos released by Ralph Lauren shows Polo shirts made from recycled plastic bottles. Each shirt is made from an average of 12 bottles collected in Taiwan, where the Polos are made, in partnership with an organization called First Mile. The shirts will be available Thursday for men and women at RalphLauren.com and in stores around the globe.
Ralph Lauren via AP

Polo Ralph Lauren on Thursday launched a version of its iconic polo shirt made entirely of recycled plastic bottles and dyed through a process that uses zero water.

David Lauren, the youngest son of the company's founder and its chief innovation officer, told The Associated Press ahead of the announcement that the new shirt is part of a broader strategy of fresh environmental goals throughout the manufacturing process.

"Every day we're learning about what's happened with global warming and what's happening all around the world, and our employees and our customers are really feeling that it's time to step up and make a difference," Lauren said.

The Polo isn't the first of its kind. Smaller brands around the world are using repurposed and recycled materials. In announcing Earth Polo, Ralph Lauren committed to removing at least 170 million bottles from landfills and oceans by 2025. The shirts are manufactured in Taiwan, where the bottles are collected. Each uses an average 12 bottles.

The shirts are produced in partnership with First Mile, an organization that collects the bottles turned into yarn and, ultimately, fabric. The new fibers will also be used for existing performance wear already made of polyfibers, which are popular for their ability to wick away moisture.

The Earth Polo went on sale Thursday, ahead of Monday's Earth Day, at RalphLauren.com and retail stores around the world. It comes in styles for men and women in green, white, navy and light blue. The shirts are not more expensive than other Polos.

Ralph Lauren has taken on environmental initiatives over the years, but it's putting into place a more significant strategy aimed at changing both its corporate culture and how it thinks about the clothes it produces. The effort includes a new supply chain and sustainability officer, Halide Alagoz, who said more details will be released in June.

"At the moment we're refreshing our approach and framework around sustainability," she said.

Other fashion powerhouses are also getting more aggressive on the environment.

Late last year, Burberry and H&M were among fashion stakeholders to sign on to the Fashion Industry Charter for Climate Action, launched at the United Nations Climate Change Conference, COP24, in Poland. The charter contains a vision to achieve net-zero emissions by 2050. Ralph Lauren is not a signatory but is exploring the call to action.

As for Earth Polo, a huge threat facing oceans today involves trillions of tiny plastic and chemical-covered non-plastic microfibers that flow from washing machines through drain water, placing smaller fish and other sea life, such as anemones, at risk. Alagoz said Ralph Lauren is working with experts who say the impact of turning a plastic bottle into recycled microfiber is "much less than that bottle ending up in the ocean."

The broader question of biodegradability of such fibers remains unresolved. For Polo Earth, the story is about recycling and reusing, Lauren said.

"There's so much out in the world that is not good for the environment. Whatever materials we can turn into threads, we'll start looking at other opportunities," he said. "Right now, we're trying to make sure that what we produce is as good for the environment as possible, or at least helps clean up another problem. Are we creating a new problem? I think we're creating solutions, or at least trying to find solutions."