"Ghost guns" are unregistered weapons that don't have serial numbers. 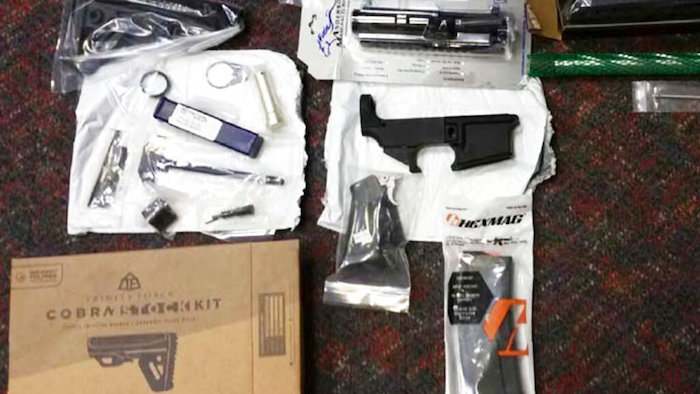 This undated photo provided by the Office of Attorney General of New Jersey shows parts of guns confiscated after being sold by mail order from a California company. New Jersey's attorney general announced a lawsuit Friday, March 22, 2019, against the California company that sells mail-order firearms parts that can be turned into working weapons, the first such action the state has taken since it banned so-called "ghost guns" last year.
Office of Attorney General of New Jersey via AP

NEWARK, N.J. (AP) — New Jersey's attorney general announced a lawsuit Friday against a California company that sells mail-order firearms parts that can be turned into working weapons, the first such action the state has taken since it banned so-called ghost guns last year.

The company was sent a letter in December asking it to "stop advertising, offering for sale, and/or selling 'ghost guns' and 'ghost gun' parts to New Jersey residents," according to the suit. But in February, an investigator for the attorney general's office ordered parts for an AR-15 assault rifle. The shipment was received this month, according to the suit.

According to Attorney General Gurbir Grewal, 15 other companies that received similar letters have either posted warnings to potential New Jersey buyers on their websites or removed the state from lists of available shipping addresses.

The lawsuit seeks civil penalties and to stop the company from shipping parts to New Jersey.

A phone message seeking comment was left Friday with the company.

"Ghost guns" are unregistered weapons that don't have serial numbers. Companies sell the nearly complete weapons, often along with the parts needed to finish them, as well as training so the firearms can be completed.

"By advertising and selling dangerous and illegal ghost guns to New Jersey residents, failing to disclose the criminal liability buyers are exposing themselves to, and affirmatively misrepresenting that these guns are legal to purchase, this company has shown blatant disregard for New Jersey's consumer protection laws," Division of Consumer Affairs Acting Director Paul R. Rodríguez said in a statement.

The company is about 60 miles (100 kilometers) northeast of Los Angeles.