Law enforcement officials argue that distracted driving is underreported and that weak punishments do little to stop drivers from using their phones. 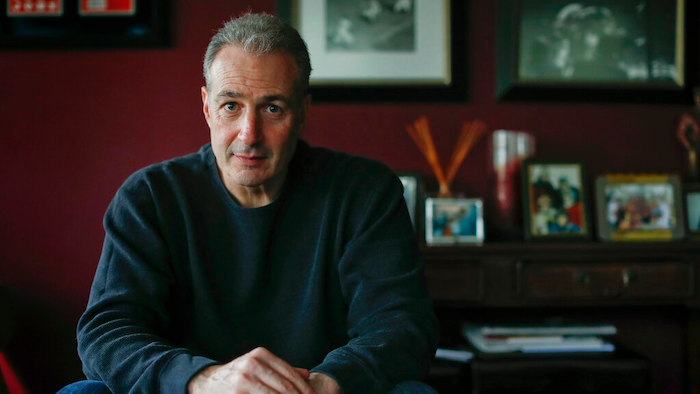 In this May 10, 2017 file photo, Ben Lieberman poses for a photo at his home in Chappaqua, N.Y. Lieberman, whose 19-year-old son died in a crash involving distracted driving, is urging support for a legislative proposal that would make Nevada the first state in the U.S. to allow police to use prototype technology to find out if a person was using a cellphone during a car crash.
AP Photo/Julie Jacobson, File

CARSON CITY, Nev. (AP) — Most states ban texting behind the wheel, but a legislative proposal could make Nevada one of the first states to allow police to use a contentious technology to find out if a person was using a cellphone during a car crash.

The measure is igniting privacy concerns and has led lawmakers to question the practicality of the technology, even while acknowledging the threat of distracted driving.

The future of the Nevada proposal isn't clear. A similar measure introduced in 2017 failed in the New York Legislature, but lawmakers are considering it again.

Law enforcement officials argue that distracted driving is underreported and that weak punishments do little to stop drivers from texting, scrolling or otherwise using their phones. Adding to the problem, they say there is no consistent police practice that holds those drivers accountable for traffic crashes, unlike drunken driving.

If the Nevada measure passes, it would allow police to use a device known as the "textalyzer," which connects to a cellphone and looks for user activity, such as opening a Facebook messenger call screen. It is made by Israel-based company Cellebrite, which says the technology does not access or store personal content.

Advocate Ben Lieberman, who lost his 19-year-old son to a crash where a driver had been texting, has become the face of the push for the device. The New York resident urged a panel of Nevada lawmakers to support the measure earlier this month, saying distracted driving should hold a greater social stigma.

"When I was growing up, drunk driving was a joke. Now it's not a joke," he told lawmakers earlier this month. "Device use is a joke. Make it so it's not funny."

Opponents air concerns that the measure violates the Fourth Amendment, which protects against unreasonable search and seizure.

Jay Stanley, a senior policy analyst at the American Civil Liberties Union, also raised questions over how the software will work and if it will be open sourced so the public can ensure it doesn't access personal content.

Lieberman points to a paper by Ric Simmons, a professor at Ohio State University's law school, arguing that testing a cellphone after a crash is "minimally intrusive" and does not violate the Fourth Amendment.

In the initial version of the Nevada proposal, drivers who refused to have their phones checked would have faced a 90-day suspension of their driver's license. An amendment by the measure's sponsor, Democratic Assemblywoman Michelle Gorelow, withdrew the penalty and said police must obtain a warrant if a driver refuses access.

The amendment led Democratic Assemblyman Ozzie Fumo to ask if the legislation was necessary because police already can get search warrants to access cellphones.

"Wouldn't it be better just to give this technology to (the police) and so that they can utilize it after they get the warrant already?" he said. "Nothing in this bill is actually new, 'cause the law enforcement (agency) already has the techniques and tools that we're providing."

A search warrant on a cellphone can yield additional information following a fatal crash, but that practice is not uniform among law enforcement agencies, said Steven Casstevens, a police chief in Buffalo Grove, Illinois, and first vice president for the International Association of Chiefs of Police.

John Whetsel, former sheriff of Oklahoma County, Oklahoma, said the practice is not consistent among agencies because distracted driving is still a relatively new issue. Plus, laws vary between states and securing a search warrant for a phone can depend on an agency's resources, he said.

Gorelow, the measure's sponsor, argued that phone records only provide a "sliver" of information. Social media use, browsing the internet and playing games would not show up on those records, she told lawmakers.

"It's like a Breathalyzer that only detects tequila," Gorelow said, adding that the "textalyzer" would only show if a person was swiping or typing.

The National Highway Traffic Safety Administration says 3,450 people died nationwide in 2016 from traffic crashes where distraction was an issue. About 14 percent involved someone using a cellphone, the agency said.

"If you're the at-fault driver and you cause the crash because you're talking on your cellphone, you're likely not to admit it," Casstevens said.

New York is considering legislation that would allow police to use the technology to check a person's cellphone after a wreck. A separate New York measure would allow for a pilot program in Westchester County.

They come more than a year after Democratic Gov. Andrew Cuomo directed the state's traffic safety committee to study the technology.