From Closets to Cooktops, Tech Aims to Bring Efficiency Home

While homeowners list security cameras, video doorbells and programmable thermostats as the technology they're most interested in, the future is offering that and much, much more.

Karen Schwartz
This Feb. 23, 2019 photo shows the GE Profile Kitchen Hub. The vent hood also works as touchscreen or voice-assistant tablet. Built-in cameras let the cook post food or video of what's on the stove, or in front of the hood.
Karen Schwartz via AP

LAS VEGAS (AP) — Closets that freshen clothes, cooktops that won't let pots boil over, faucets told to dispense just enough water to fill the coffee maker. Wherever one looked at the annual Design and Construction Week, there was a new way to make our lives more efficient.

"We can make appliances work harder for you," said Cara Acker, a senior brand manager for Bosch Home Appliances.

So while homeowners list security cameras, video doorbells and programmable thermostats as the technology they're most interested in, according to a survey by the National Association of Home Builders, the future is offering that and much, much more.

More than 2,000 exhibitors participated in the annual trade show, which brings the NAHB and the National Kitchen and Bath Association together. Some highlights:

Two companies, LG and Samsung, demonstrated self-contained clothing lockers that use a combination of air and steam to remove dust and odors from clothes and other items, like stuffed animals and pillows.

Samsung Electronics says a 25-minute cycle in its AirDresser removes 99 percent of the germs and bacteria in clothes ranging from cotton to cashmere.

LG Electronics, meanwhile, says its LG Styler with SmartThinQ eliminates so many allergens during a 20-minute cycle that it's certified by the Asthma & Allergy Foundation of America.

Both units can hold three items and a pair of pants, and both are Wi-Fi-enabled to send alerts when the cycle is finished. The Styler can also recognize simple voice commands through Google Assistant.

One difference between the two is that the AirDresser has hangers that send jets of air over and through the garments, while the Styler vibrates the hangers back and forth about 220 times per minute.

"It extends the life of clothing in between trips to cleaners, saving users money and keeping them looking their best," said LG Styler spokeswoman Taryn Brucia. Price tag: about $2,000.

The Styler is already on the market, with a new black mirror finish available later this year. The AirDresser launch date isn't yet set.

It's a bold boast, but Bosch and Thermador, which are owned by the same parent company, say their high-end dishwashers will eliminate towel and air-drying, even on plastic.

To show how it works, Acker added water to a goldfish bowl containing small white pellets of the mineral zeolite. The water was quickly absorbed, and the bowl warmed noticeably. In their high-end dishwashers, the heat generated by the moist zeolite is circulated through the tub after the final drying cycle. This "CrystalDry" feature should be available in late summer on the Bosch Benchmark and 800 Series dishwashers. The price hasn't been released, but the technology debuted last year on the Thermador Star Sapphire dishwasher with "StarDry," which retails for $2,800.

Not to be left out, the mid-priced Bosch 500 series dishwashers will be advertising a new feature called AutoAir. It pops the dishwasher door open about 5 inches at the end of the cycle to release steam. (Look for it in late summer. Price not yet released.)

Induction cooking is getting an upgrade, and celebrity chef Brian Malarkey used it in a cooking demonstration at the GE display, touting the precise control it allows.

"You have so much more range," he said.

For those with nascent cooking skills, GE Appliances' new Cafe brand offers an induction surface that uses Bluetooth to sync the burner with a smart frying pan when following a recipe through its Hestan Cue app. That pairing will adjust the pan temperature and monitor the cooking time. It retails for $2,530-$4,300.

For more confident cooks, Gaggenau has a full-surface, 36-inch induction cooktop that can determine the shape, size and position of up to six pots or pans. The power level follows the pan as you move it around the cooktop, and sensors ensure that pots don't boil over. It retails for $6,750, with a five-pan, 30-inch cooktop selling for $6,200.

FLAUNT IT IF YOU'VE GOT IT

While Houzz principal economist Nino Sitchinava told a seminar that a "hot new trend" is to hide the range hood behind cabinetry, GE Profile is taking the opposite approach with its new 27-inch "Kitchen Hub."

In addition to a four-speed ventilation system, the flat-fronted hood is a touchscreen that can take voice commands via Google Assistant. Cameras face forward and down to allow multitaskers to post food shots or video chat while they cook. The hood can also be used to access recipes, playlists, social media and Netflix, or to connect with some other GE and Haier smart products to perform tasks such as adjusting the thermostat or turning on the dryer. It is set to launch in May for $1,200-$1,400.

For those of us who can't see straight until we've had our coffee, there's now a way to measure the correct amount of water automatically.

Delta's VoiceIQ faucets lets you set up to six custom container sizes, so a voice command to "fill coffee pot" will turn the water on and off, dispensing the preset amount. It also understands requests for direct measurements, like "2 cups" or "3 quarts." Available for the past few months on its $500 Trinsic faucet, the $150 VoiceIQ module will be sold separately starting this summer. It is designed to work on any Delta faucet with Touch2O Technology manufactured after January 2018.

Another smart water product intended to reduce the headaches caused by leaking faucets and frozen pipes won an award at the show for best Smart Home Technology. The Flo by Moen hooks up to a home's main water supply line. Sensors on the Wi-Fi-connected device monitor water flow, pressure and temperature, while artificial intelligence differentiates between normal and abnormal use. Homeowners are fed the information and alerts through a smartphone app. It retails for $500.

BLACK IS THE NEW GRAY

On the show floor, stainless and black stainless appliances were in abundance, as were shades of white and the occasional pop of cobalt blue and emerald green.

And there are new options on the horizon. The Cafe brand offers glass fronts over a platinum finish this fall. And, Samsung is launching a new neutral color this spring: Tuscan Stainless. The warm natural bronze finish was shown on a refrigerator, which still carried accents of stainless steel. A Samsung spokesman said that was to allow the refrigerator to coordinate with existing stainless appliances. 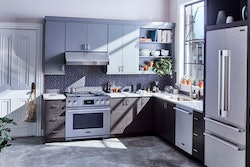 Kitchens of the Future 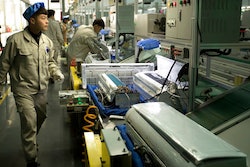