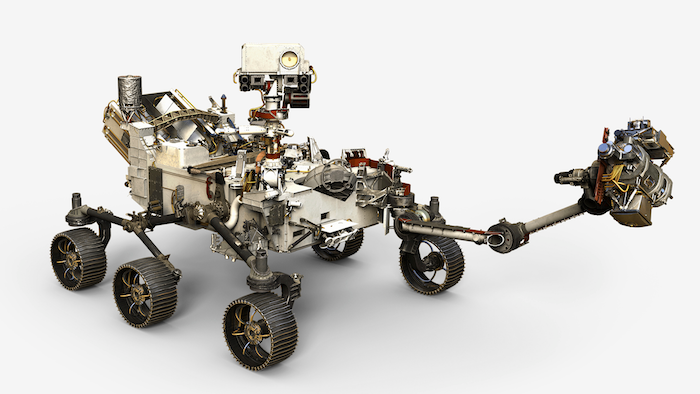 This artist's rendering from NASA depicts the Mars 2020 Rover. As Mars' newest resident settles in, Planet Earth is working on three more landers and at least two orbiters to join the scientific Martian brigade. NASA’s Mars 2020 will hunt for rocks that might hold evidence of ancient microbial life and stash them in a safe place for return to Earth in the early 2030s. It's targeting a once-wet river delta in Jezero Crater. NASA's InSight spacecraft touched down on Mars on Monday, Nov. 26, 2018.
NASA via AP

NASA's InSight spacecraft touched down on the sweeping, red equatorial plains Monday, less than 400 miles (640 kilometers) from Curiosity, the only other working robot on Mars.

That's about the distance from San Francisco to Pasadena, California, home to Mission Control for Mars.

InSight — the eighth successful Martian lander — should be wrapping up two years of digging and quake monitoring by the time rovers arrive from the U.S., Europe and China.

NASA's Mars 2020 will hunt for rocks that might hold evidence of ancient microbial life and stash them in a safe place for return to Earth in the early 2030s. It's targeting a once-wet river delta in Jezero Crater.

The European-Russian ExoMars also will sniff out possible past life, drilling a couple yards (meters) down for chemical fossils. A spacecraft that was part of an ExoMars mission in 2016 crash-landed on the red planet.

The Chinese Mars 2020 will feature both an orbiter and lander. The United Arab Emirates, meanwhile, aims to send its first spacecraft to Mars in 2020; the orbiter is named Hope, or Amal in Arabic.

It seems our neighbor Mars holds a siren song for Earthlings, even as NASA shifts its immediate attention back to our moon.

Just three days after InSight's landing, NASA announced a new commercial lunar delivery program. The space agency has chosen nine U.S. companies to compete in getting science and technology experiments to the lunar surface. The first launch could be next year.

NASA wants to see how it goes before trying something similar on Mars.

"The moon is where it's at right now relative to commercial space," said Thomas Zurbuchen, head of NASA's science mission office, which is leading the lunar payload project.

At the same time, NASA is pushing for an orbiting outpost near the moon for astronauts, at the Trump administration's direction. It would serve as a stepping-off point for moon landings, according to NASA Administrator Jim Bridenstine, and provide critical experience close to home before humans embark on a two- to three-year mission to Mars.

Bridenstine envisions a trip to Mars for astronauts in the mid-2030s, admittedly a "very aggressive" goal.

"The reality is, yes, your nation right now is extremely committed to getting to Mars," Bridenstine said following InSight's touchdown, "and using the moon as a tool to achieve that objective as fast as possible."

Mars is the obvious place for "boots on the ground" after the moon, said Zurbuchen.

What makes Mars so compelling — for robotic and, eventually, human exploration — is its relatively easy access, said InSight's lead scientist, Bruce Banerdt of NASA's Jet Propulsion Laboratory. One-way travel time is six months, every two years when the planets are closest. Conditions are harsh, but relatively hospitable. "Kind of like being in Antarctica without the snow," said Banerdt.

On top of that, Mars may be one of the most likely places to find life outside of Earth, according to Banerdt.

Jupiter's moon Europa may have harbored or even still hold life, but it would take so much longer and cost so much more to get there that Banerdt said it's hard to imagine achieving such a mission anytime soon.

A life-seeking mission to Europa might come about every decade, Banerdt said, while it's plausible to have robotic sniffers launching to Mars every two years. That's five Mars missions for every single one at Europa, he noted.

Mars currently has two functioning spacecraft on the surface — InSight and Curiosity — and six satellites in working order from the U.S., Europe and India. The U.S. is the only country to successfully land and operate a spacecraft on Mars. Curiosity has been roaming the red surface since 2012. NASA's much older Opportunity rover was working until June when a global dust storm disabled it.

In pursuit of the geological but not biological secrets deep inside Mars, InSight already is providing astounding pictures of a location "no human has ever seen before," pointed out JPL director Michael Watkins. These photos remind us that in order to do science like this, "we have to be bold and we have to be explorers."

"You're all invited back," Watkins told Monday's jubilant landing-day crowd.