The issue of airworthiness is crucial because of concerns over technical issues with the new Boeing 737 MAX. 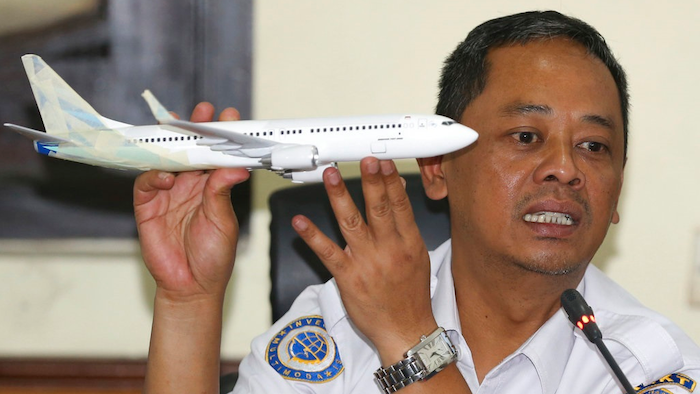 National Transportation Safety Committee investigator Nurcahyo Utomo holds a model of an airplane during a press conference on the committee's preliminary findings on their investigation on the crash of Lion Air flight 610, in Jakarta, Indonesia, Wednesday, Nov. 28, 2018. Black box data collected from their crashed Boeing 737 MAX 8 show Lion Air pilots struggled to maintain control as the aircraft's automatic safety system repeatedly pushed the plane's nose down, according to a preliminary investigation into last month's disaster.
AP Photo/Achmad Ibrahim

JAKARTA, Indonesia (AP) — Investigators of the Oct. 29 crash of a Lion Air flight into the Java Sea say the Boeing 737 MAX aircraft was deemed airworthy when it made its final takeoff from Jakarta.

The officials summoned reporters Thursday to clarify comments made at a news conference the day before, where some media reported the investigators had said the plane was not airworthy when it took off.

The issue of airworthiness is crucial because of concerns over technical issues with the new Boeing 737 MAX that crashed and questions over the airline's safety procedures.

Black box data showed the pilots fought against an automated system that pitched a Boeing jetliner's nose down repeatedly because of a faulty sensor until they finally lost control. All 189 people aboard the flight between the Indonesian capital of Jakarta and a regional airport died in the disaster.

The National Transportation Safety Committee investigators were reporting this week on data from the aircraft's black boxes. The preliminary report stopped short of placing blame for the crash — the investigation is continuing — but it provided new details about the pilots' difficulties handling the highly automated jet and Lion Air's inability to fix problems with sensors on the plane.

The investigators say the cockpit voice recorder, which is still missing and being searched for, is needed to understand what exactly caused the jet to plunge in the Java Sea just 11 minutes after takeoff.

On Wednesday, Utomo said the plane had experienced technical problems on four of the six flights before it crashed. On its penultimate flight from the Balinese capital of Denpasar to Jakarta, as during the final one, pilots struggled to prevent an automatic safety feature from forcing the nose of the aircraft down due to problems with its sensors.

The report released Wednesday noted that during the Denpasar to Jakarta flight a "stick shaker" activation — a warning signal to pilots — continued throughout the flight as the flight crew struggled and eventually succeeded to bring the aircraft under control.

"This condition is considered as an un-airworthy condition and the flight shall not be continued," it said of that flight.

Utomo said that based on maintenance records, flight engineers had made repairs and run tests as needed.

Another investigator, Ony Suryo Wibowo, said there were special procedures to be followed when there are problems with an aircraft.

Wibowo said the pilot would make the final choice about whether or not to cancel or abort a flight, and the investigators were trying to understand how the pilot made his decision.

The aircraft maker has a great deal at stake in defending its plane.

More than 200 MAX jets have been delivered to airlines around the world. Pilots at American Airlines and Southwest Airlines complained this month that they had not been given all information about the new automated anti-stall safety system on the MAX.