What's New - And What's Missing - In Your Next New Car

If you get a flat on your next new car, don't be shocked if you can't find the spare tire. 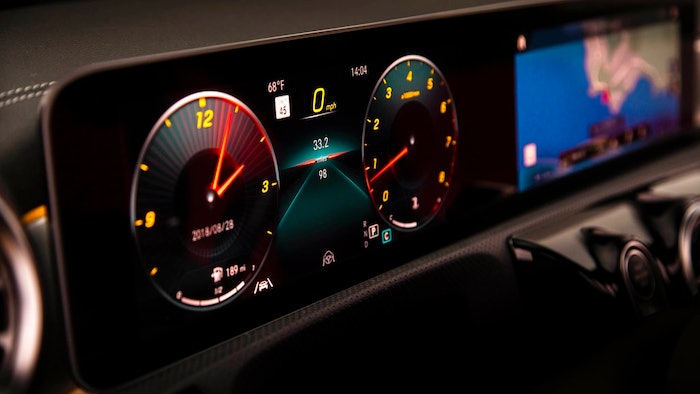 This undated photo provided by Mercedes-Benz shows an LCD screen in the 2019 A 220 4Matic Sedan. The screen is an example of a trend: digital gauges replacing analog ones in vehicle instrument panels. Digital gauges are customizable and can display more information than traditional gauges.
Courtesy of Mercedes-Benz via AP

Automakers are continually making changes in vehicles. These can be technological breakthroughs, such as the automatic emergency braking systems that are increasingly becoming standard on new cars. Some are mandated changes, such as a federal requirement that all vehicles have backup cameras, which went into effect in May.

Many of these feature swaps don't get a lot of fanfare, so you might not always realize what's come and gone until you're shopping for a new car. Here's an overview.

This feature allows drivers to start their cars while keeping the key in their pockets or purses. It's often paired with a keyless access system that allows entry into the car without pushing any buttons on the key fob.

Keyless start systems may pose a danger if you're not careful: Some owners have forgotten to shut off their cars in attached garages, leading to more than 24 cases of carbon monoxide poisoning since 2006, according to the New York Times. Newer systems do a better job of alerting you if the key moves too far away from the car while the engine is still on.

It's falling out of favor. In 2008, keyed ignition systems were standard in 89 percent of new cars. Now, they're in just 38 percent.

This system started in hybrid cars and is designed to shut off the engine when you come to a stop, saving fuel and reducing emissions. Once your foot is off the brake, the engine starts itself back up in about a second.

If you love the engine's gentle thrum (or throaty rumble) as you sit at a stoplight, you'll have to enjoy some other aspect of your car's personality. In 2008, just 3 percent of new vehicles had stop-start as a standard feature. For the 2018 model year, it's up to 40 percent.

IN: Xenon and LED headlights

It's quite a light show in cars today, with these newcomers fighting for dominance. Xenon lights are brighter and last longer than traditional halogen bulbs. LED lights do even better in brightness and longevity than xenons. The real selling point for carmakers is that LED lights consume less power and can be configured in more unique shapes.

In 2008, 24 percent of vehicles came standard with xenon or LED headlights, according to Edmunds data. It's up to 51 percent for the 2018 model year.

They were dominant for decades, but they're winking out. Halogen headlights use has dropped by 27 percentage points over the past 10 years.

If you get a flat on your next new car, don't be shocked if you can't find the spare tire. It's likely been replaced by the tire repair or a tire inflator kit. In 2009, these kits were standard on just 5 percent of vehicles. They are standard on 23 percent of 2018 models. The kits save vehicle weight and allow for more usable trunk space.

OUT: Spare tires. Full-size spares are now confined mainly to pickup trucks or large SUVs. The smaller temporary or "doughnut" spare tire has lost market share but is still the most common flat-tire remedy and is standard on 45 percent of 2018 vehicles. Run-flat tires are the other non-spare solution.

Edmunds does not formally track the following features, but they're increasingly common in the vehicles we test.

Users can customize digital instrument clusters and carmakers can configure them to display more information. They're found in such cars as the current models of the Ford Mustang, Honda Accord, Mercedes-Benz E-Class and Volkswagen Atlas.

They take up too much space for their single-purpose uses.

IN: The electronic parking brake

A button push applies the parking brake. It's in the Mazda CX-5, the BMW 5-Series, the Ram 1500 and many other vehicles.

OUT: The manual parking brake

Say goodbye to the hand lever or the foot pedal. Their absence gives carmakers more room in the vehicle console or footwell.

EDMUNDS SAYS: If you're determined to hang onto an outgoing feature, such as the spare tire, make it part of your must-have list when car shopping. Sometimes, though, it's better to let go of the old and embrace what's new.