In addition to technology trouble, complaints about battery failures jumped by 44 percent compared with last year. Batteries were the most frequently replaced part not related to normal wear, the study found. 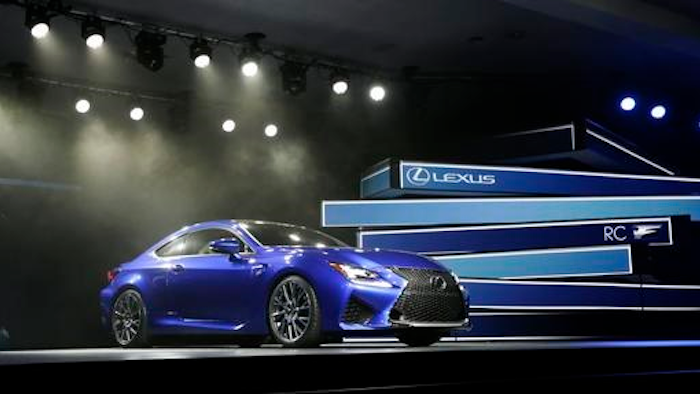 In this Jan. 14, 2014 file photo, the Lexus RC F Coupe is unveiled at the at the North American International Auto Show in Detroit. Technology glitches including Bluetooth phone pairing and misunderstood voice commands dented car and truck reliability scores in a major survey of automobile owners. Lexus and Porsche tied for the top spot, leading all brands for dependability in the survey released Wednesday, Feb. 22, 2017, by the consulting firm J.D. Power.
AP Photo/Carlos Osorio, File

Lexus and Porsche tied for the top spot, leading all brands for dependability in the survey released Wednesday by the consulting firm J.D. Power. But electronic problems caused trouble across the industry, pushing the average up to 156 problems per 100 vehicles. That's four problems higher than last year and the highest number since J.D. Power changed scoring methods in 2015.

Toyota, Buick and Mercedes-Benz rounded out the top five most dependable brands, while Fiat, Jeep and Infiniti were the least reliable, according to the survey.

In addition to technology trouble, complaints about battery failures jumped by 44 percent compared with last year. Batteries were the most frequently replaced part not related to normal wear, the study found.

That's because people are buying vehicles with more electric features such as power seats and high-end audio systems, plus automakers are converting mechanical devices such as power steering to electric power, said Dave Sargent, J.D. Power's vice president for global automotive. Also, in an effort to save fuel by reducing drag on the engine, automakers aren't fully charging batteries in some cases, Sargent said. "It seems like that maybe isn't going as well as they would like," he said.

The study found that mainstream brands are catching up with luxury and niche brands with excellent reliability. Of the top-10 brands, five are considered mainstream. Besides Toyota and Buick, Hyundai (6th), Chevrolet (8th) and Honda (9th) made the top 10. Luxury brands BMW (7th) and Jaguar (10th) also were high in the rankings.

The scores are important, because buyers who are unhappy with their vehicles are less likely to buy a future vehicle from the same brand. "We find buyers are increasingly avoiding models with poor reputations for dependability, so manufacturers can't afford to let quality slip," Sargent said.

Automakers have struggled for nearly a decade to perfect electronic systems that link phones and handle voice commands. J.D. Power said the audio-communication-entertainment-navigation category caused the most problems in the survey, accounting for 22 percent of complaints. That's up from 20 percent last year.

The survey didn't include any vehicles with Apple CarPlay and Android Auto, which automakers have recently allowed into their in-dash systems. Both mimic the user's phone on the car touch screen. Sargent said he expects them to cause more problems at first as drivers become confused about whether they are using the phone system or the car's electronics.

The study also ranks brands by market segment. Segment-level winners included the Camry for most dependable midsize car while Toyota's FJ Cruiser was the top Compact SUV. Ford's F-150 was the most reliable pickup truck.