These are not your parents' waterbeds. 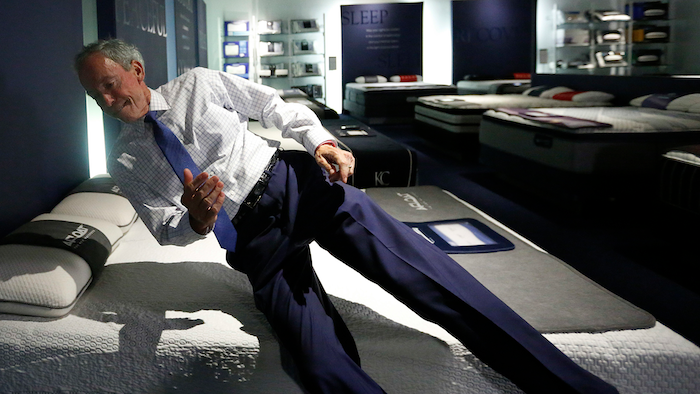 In this June 26, 2018, photo City Furniture CEO Keith Koenig, jumps onto a waterbed as he speaks during an interview with the Associated Press, in Tamarac, Fla. Koenig and inventor Charles Hall, pioneers of the waterbed industry in the United States, are hoping to generate a new wave of popularity for the old furniture concept by using a wholesome new pitch.
AP Photo/Brynn Anderson

TAMARAC, Fla. (AP) — Waterbeds still elicit a wink, wink, nudge, nudge whenever they come up in conversation — but two pioneers of the industry in the United States are hoping to generate a new wave of popularity for the old furniture concept by using a wholesome new pitch.

Talking about temperature-control innovations and health-conscious consumers, inventor Charles Hall and City Furniture CEO Keith Koenig don't sound like wild and crazy guys. They aren't the ones who joke that millennials claiming to have never seen a waterbed likely were conceived in one.

In the City Furniture showroom in Tamarac, a sign promises Afloat mattresses are "not your parents' waterbed." Koenig flops onto one, describing how it contours to his physique while also fitting into standard bedding and stylish bed frames.

He's not selling nostalgia, and he doesn't bring up waterbeds' notorious reputation until he's asked point-blank about it.

But he says he also told Koenig, "Come on, we can't be boring!"

Koenig, whose furniture store chain started as Waterbed City in 1971, has joined with Hall and former waterbed manufacturer Michael Geraghty to form Tamarac-based Hall Flotation, which produces the Afloat waterbeds. They range from about $2,000 to $3,300 — adjusting for inflation, about the same cost as a waterbed in 1975. 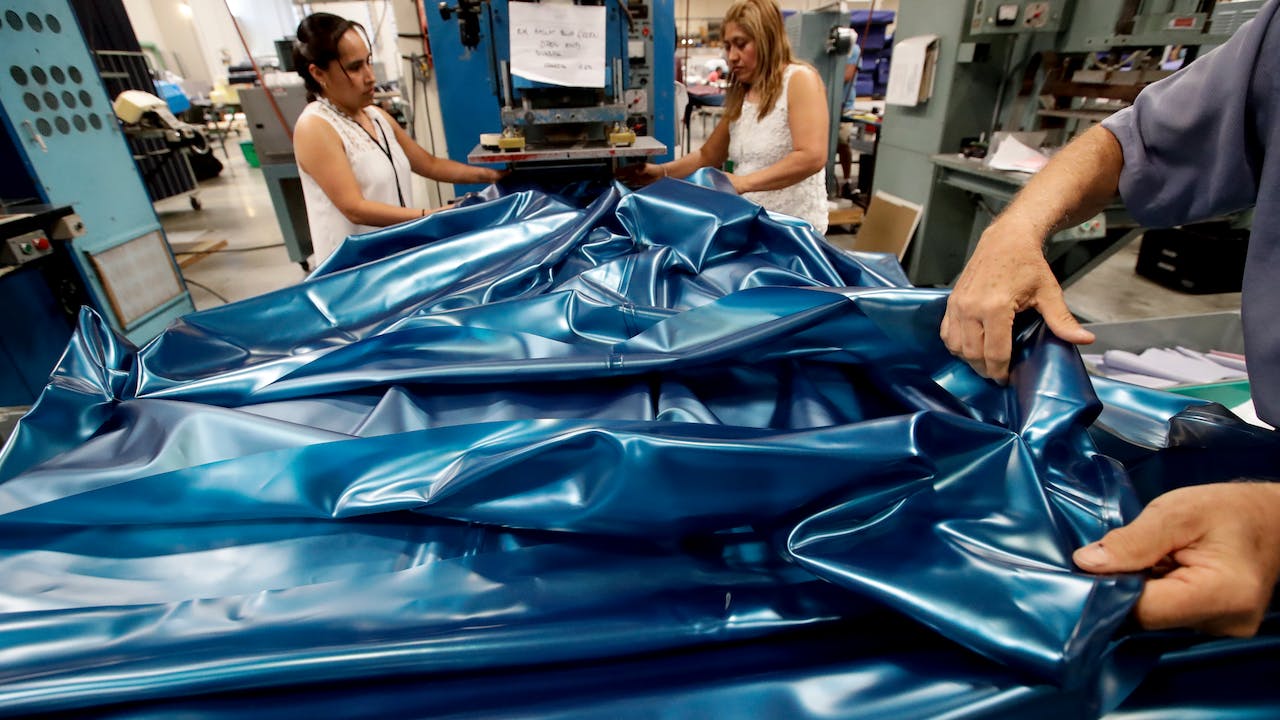 In this July 5, 2018, photo workers assemble the Afloat water bed at the factory in Corona, Calif. Two pioneers of the waterbed industry in the United States, are hoping to generate a new wave of popularity for the old furniture concept by using a wholesome new pitch.AP Photo/Chris Carlson

They've traded product names Hall used in the 1970s such as The Pleasure Pit and Pleasure Island for the sober-sounding Firm and Pure models.

"Seeing a thing undulate like they did in the early 1970s, people looked at it and said, 'Well, this is an interesting ride,'" Hall said. "Now it's comfort first."

With materials unavailable in waterbeds' heyday, Hall said, "it's been kind of fun to reimagine all the things to make the design better."

It's been 50 years since Hall initially designed a waterbed for a thesis project at San Francisco State University. By the mid-1980s, the Waterbed Manufacturers Association reported roughly $2 billion in annual sales.

"People who might have bought it for Saturday nights, then started using it every night," Hall said.

Michael Dart was one of those 1980s customers in Rochester, New York. His waterbed didn't move with him to Florida several years later, and Dart said he missed its comforting warmth. When he went mattress shopping in June, he was thrilled to see the Afloat beds at City Furniture and bought the first one.

"It's like floating, it's so nice," Dart said at his Coral Springs home. "Everybody is like, 'Really, you got a waterbed?' And I'm like, 'Yeah, they're really good, they're better than they ever were.' I'm like a pop-culture hero now with the guys at work."

If those guys think Dart is swell, they should meet Jeri Lollis, who really seems to be living her best life with a waterbed. She bought her first one 40 years ago, about the same time she installed a mirror on her bedroom ceiling in her red-roofed mobile home in Hull, Georgia.

"I bought it because it was different, it was controversial , it was almost a conversation piece," said Lollis, a retired corrections deputy.

Two years ago, for her 80th birthday, Lollis bought a new waterbed, and she still gets a kick out of the looks she gets about her bedroom setup. After hearing about the Afloat venture, she said she'd love to take Hall out to dinner to compare their adventures as waterbed owners.

"I hope they think I'm a femme fatale, you know? If there is any sexual innuendo, good! I'm kind of a weird, different person. I think anything's OK," Lollis said.

Koenig is quick to clarify that while one of Hall's waterbeds was covered in velvet and featured in Playboy magazine, the inventor was no Hugh Hefner.

"Charlie was a smart, conservative, laid-back, California design guy, and this industry that he grew, that he started, became pretty wild," Koenig said. "The parties at the trade shows in the '70s and '80s, well, I couldn't stay long, and Charlie was not that kind of guy either."

Koenig pulled the plug on waterbed sales at City Furniture stores about 20 years ago because he was unhappy with the available supply. But he's decided it's time to reintroduce them.

The first shipment of roughly 40 beds sold out within a month, Koenig said. City Furniture is extending its Afloat test market to nine of its 17 Florida stores, and Geraghty said Hall Floatation website sales will soon be available.

Hall is curious to see who buys more, baby boomers or younger customers. So is Lynn Hardman of Southern Waterbeds and Futons in Athens, Georgia. He sold Lollis both her waterbeds, and he's eager to see something revitalize his industry.

"The millennials buying the futons, we can't get them interested in the waterbeds," said Hardman.