His company is developing microgrids to provide electricity and educational opportunities to local public schools. 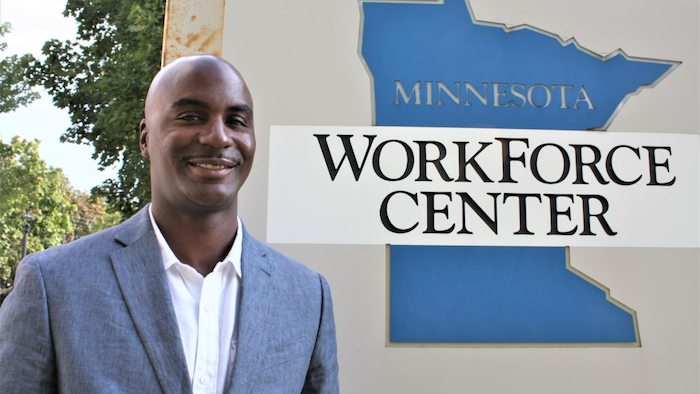 MINNEAPOLIS (AP) — Jamez Staples has big dreams of bringing clean energy — and its economic benefits — to his underserved and racially diverse Minneapolis neighborhood.

The 39-year-old solar entrepreneur recently bought and is working to reopen a shuttered state workforce center as a clean energy job training hub in an area of town that's long been isolated from such opportunities.

Meanwhile, his company is developing a community solar garden and microgrids to provide electricity and educational opportunities to local public schools.

The ambitious vision for the North Side of Minneapolis is inspired in part by Staples' time as a volunteer solar installer in the Virgin Islands, and it's fueled by his relentless networking with local politicians and clean energy leaders.

"My idea is to plant enough seeds and keep watering them all," Staples said. "It's like a garden in that I'm planting seeds and hope some of them will germinate."

Now backed by a growing list of partners and supporters, the effort still faces hurdles, from fundraising to the slow pace of bureaucracy.

The North Side native still lives in the neighborhood where he grew up, and where he is known by politicians, developers and nonprofits. He's established a name for himself well beyond that geography in state clean energy circles.

"He is a big picture visionary person, and you need that to make a big, audacious goal happen," said Ellen Anderson, director of the Energy Transition Lab at the University of Minnesota. "He's a great connector to people, to the mayor, private funders and others."

Staples began his career as an insurance agent before starting a business in the auto sales industry. When the Great Recession hit in 2008, he found a job in the metal recycling business.

A few years later, while attending Concordia University, Staples spent time in the Virgin Islands as part of his course work. Volunteering to install solar projects on the island, he gained skills and love of the clean energy industry.

Staples returned to Minnesota around the same time Gov. Mark Dayton signed the 2013 Solar Jobs Act bill, requiring that utilities generate 1.5 percent of their power from solar by the end of the decade. He created Renewable Energy Partners the same year and hired a few contractors to install panels on the Mayflower United Church of Christ in Minneapolis.

The idea was to train and employ minority workers for solar contracts, following in the path of social entrepreneur Van Jones, who brought national attention to bridging the disparity gap with skills training and green jobs development.

"I decided I was going to pick up on the work Van Jones started years ago addressing climate change and poverty," he said. "I kept pushing."

Staples isn't shy about sharing his vision, and as a presenter he knows how to work an audience. That's helped him win support from the mayor, the governor, school board members, neighborhood groups and Xcel Energy, the city's electric utility.

"I'm inspired by the way he inspires people when he does his presentation," said Doug Shoemaker, a board member of the Minnesota Renewable Energy Society. "He's good at laying the facts out and people gravitate toward his ideas because they make so much sense."

"One of Staples' main contributions has been forcing people to rethink their strategy and start considering every single investment in sustainability, greater resiliency and clean energy is an opportunity to address poverty and environmental justice issues," he said.

What differentiates Staples' from other solar developers is his "community centric" approach to projects. Outside groups have come in with ideas to "fix the neighborhood" and residents have grown tired of hearing of solutions they never asked for, he said.

Another asset, Krause said, is that Staples is not "nibbling at the edges or trying to catch up" with his projects but rather "do some of the most advanced and sophisticated work in energy and vocational training than is being done anywhere in Minnesota or the Midwest. in one of the poorest communities in the state."

By Staples' own admission, his frankness about disparity can make notoriously polite Minnesota residents uncomfortable about how race, training and location can play roles in determining career opportunities.

While not everyone he meets enjoys such honesty he's willing to call out supporters in governments and schools who cheer his ideas yet fail to offer any financing to get them off the ground. Together with Krause, however, and a legion of supporters, he figures he has a fighting chance to make a difference.

In 2017, the city of Minneapolis inked a deal with Renewable Energy Partners to buy 20 percent of the power produced by a 1 megawatt project on the roof of North High School. The rest, said Staples, will be sold to Minneapolis Public Schools and low- to moderate-income North Side residents.

Still in the engineering phase, the high school solar installation and a microgrid to go with it should be finished next year and serve as an educational introduction for students to solar industry opportunities.

Staples recently attended the Rocky Mountain Institute's E-Lab Accelerator to solidify planning for a second solar-powered microgrid that will connect several North Side schools and the district's food preparation center. The project is slated to serve as an anchor to a proposed East Plymouth Innovation Corridor to jumpstart clean energy and sustainable business development in the neighborhood, and also involves Anderson, the city, Xcel Energy,and tech firm Open Access Technology.

The microgrids, which at some point may be linked, strive to achieve several goals at once, including reducing schools' energy costs, highlighting a growing industry for students. Part of installation will be devoted to community solar for low-income residents. And the microgrids could add resilience for the North Side in the event of a major grid disruption — the neighborhood still remembers the years-long recovery after a 2011 tornado.

The technological approach is also far reaching for the multi-megawatt project. The idea of using existing distribution lines to create the microgrid, which will include the North Community High project as a stand-alone project, has rarely been attempted, Anderson said.

"This is very innovative in Minnesota. We have very few microgrids out there and none at this scale, and none that I'm aware of built on a design of incorporating equity and community benefits," Anderson said. The U.S. Department of Energy has favorably responded to a proposal to fund the project, she added.

Over the years, Staples discovered a major obstacle to training solar installers: the distance from established educational centers and long transit commutes. The Minnesota State Colleges and Universities' campuses with solar classes, as well as the electrician's union training center, are in distant suburbs with little access to mass transit.

"These are good paying jobs, good careers, good opportunities to make money for people on the North Side, but we need access to the training," Staples said. "That's where the training center model came from."

His vision calls for the vacant 22,000-square-foot building to become a career and vocational technical training center for high school students looking for opportunities in Minnesota's growing clean energy economy. The center would likely include classes in other emerging and sustainable technologies, such as artificial intelligence, green infrastructure and drones.

A year ago, he used a private loan to buy the workforce center site for $1.6 million, a risky move considering the money needs to be repaid in the near future. His model for the training center is the Career and Technical Education Center at Heintz in Rochester, 90 minutes south of the Twin Cities. A collaboration of the city, the public school system, a state university, community and technical college, the center teaches one or more courses to nearly 1,600 students from three high schools.

The Rochester initiative does not offer courses in clean energy, instead focusing on several areas from agriculture to manufacturing. Staples believes his Minneapolis Apprenticeship Training Center could cover many of the same subjects yet include a clean energy component.

Vocational technical training helped Rochester improve graduation rates of all students and the same could hold true of Minneapolis, he said. A Minneapolis study in 2013 showed career and technical education boosted graduation rates by 11.5 percent higher than their peers; the gains among minorities were much higher.

While garnering plenty of support from local political, business and education leaders, he still faces an uphill climb. Staples' idea is to lease the building to the school district, and while he has supporters on the school board, the district currently faces a severe budgetary crisis.

Another challenge is that the school district, business community and other public officials supporting Staples' effort are unaccustomed to working together on a project this complex, said Rebecca Gagnon, an at-large school board member. Many supporters "work in silos and this project is requiring that we come together, and that is a wonderful and difficult thing," she said.

David Shaffer, executive director of Minnesota Solar Energy Industries Association, said he was not initially sold on the training center idea until Staples explained that no solar education opportunities existed in the urban core.

"It's all really hard for people in Minneapolis to get to (training)," he said. "The ability to get trained has been pushed, inexplicably, to outside the metro."

The training center has been a passion of Staples for years and his concept has evolved as regulations forced a change, Shaffer noted. State law requires one licensed electrician for every two unlicensed solar installers, one of the highest ratios in the country, he said. There's still a need for trained installers, he said, but perhaps not as large as previously anticipated.

"Minnesota leads in all these areas — as a best place to live, as a best place for business," he said. "But we also lead in disparities because of the lack of economic opportunities for minorities. I look at that challenge as an opportunity."