The new bridge will have about 75 seismic sensors. 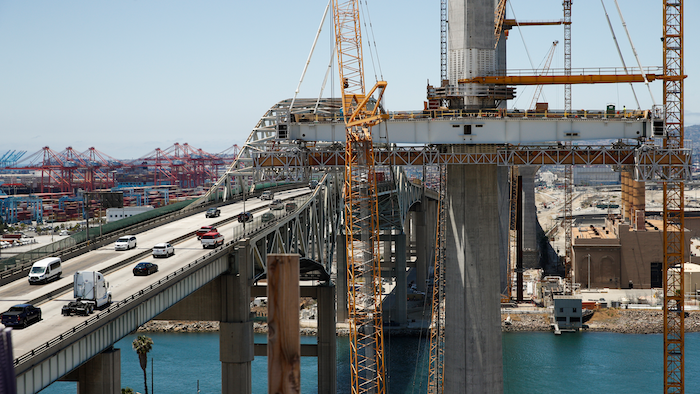 In this July 2, 2018, photo, traffic moves on the old Gerald Desmond Bridge next to its replacement bridge under construction in Long Beach, Calif. The new Gerald Desmond Bridge at the nation’s second-busiest port isn’t just a crucial route for cargo trucks and Southern California commuters - it’s a concrete-and-steel science experiment for engineers and seismologists. It’s slated to open next year.
AP Photo/Jae C. Hong

LONG BEACH, Calif. (AP) — A replacement bridge under construction at the second-busiest port in the U.S. isn't just a crucial route for cargo trucks and Southern California commuters — it's a concrete-and-steel science experiment for engineers and seismologists.

The new bridge, which will stretch 8,800 feet (2,680 meters) over the Port of Long Beach, is being built with about 75 seismic sensors that will measure the forces imparted on the span when one of several nearby faults set off an earthquake. It will replace the Gerald Desmond Bridge, though it's unclear if it will retain that name.

The new bridge is due to open next year.

"New bridges don't come along very often, so it's exciting," said Dr. John Parrish, head of the California Geological Survey. His agency's Strong Motion Instrumentation Program will be among those crunching the information the sensors capture. The data will be added to the state's database of earthquake knowledge.

California's bridges and other infrastructure have been outfitted with quake sensors called accelerometers since the 1970s. The eastern span replacement of the San Francisco-Oakland Bay Bridge that opened in 2013 has more than 200.

But the building of the new Long Beach span, south of Los Angeles, marks the first time the sensors have been incorporated into the design of a California bridge from Day One, said Duane L. Kenagy, an engineer and the port's interim deputy executive director.

The original bridge has taken a "pretty good beating" since it was built in 1968, Kenagy said. Evidence of that is the netting — called "diapers" — recently placed underneath to capture hunks of concrete that regularly break away. The roadway is "reaching the end of its natural life" but is considered safe for traffic until the new bridge opens, he said.

About 15 percent of all containerized cargo entering the U.S. travels over the span daily, and it's a key artery for motorists traveling between the city of Long Beach and San Pedro, a working-class waterfront neighborhood on the southern edge of Los Angeles.

Its nearly $1.5 billion replacement is historic for the built-in seismology and because it's the first cable-stayed vehicle bridge in California. Cable-stayed bridges are distinct from more common suspension bridges in that the main span deck is entirely supported by cables connected to the twin 515-foot (157-meter) towers. It makes for a particularly sturdy design that's been tested to withstand powerful earthquakes or a terrorist bombing.

"You just can't knock one of these things down by knocking out one or two cables," Parrish said. The design, popular in Asia and parts of Europe, is catching on in the U.S. as larger construction machinery and new high-tech materials make them cheaper and easier to build.

Designed to last 100 years, the new bridge has a higher clearance for larger cargo ships and elastic "points of isolation" that enable segments to move independently without damaging other sections. Joints and bearings are designed to break under stress and are easily replaceable to get the bridge reopened quickly after a violent shaking shuts it down.

The old bridge will be torn down. It had no sensors, so seismologists and engineers are eager for the information the new span will provide.

The span is just a few miles from two active faults — Newport-Inglewood and Palos Verdes — capable of quakes in the range of magnitude 6.5 to 7. A magnitude 6.4 quake along the nearby Newport-Inglewood fault leveled Long Beach in 1933. And a mega-fault, the infamous San Andreas, is only about 50 miles (80 kilometers) away at its closest point.

Data recorded by the sensors — a quake's magnitude along with how fast the ground is moving and at what trajectory it hits the bridge — are sent via the state's Integrated Seismic Network to scientists at state offices in Sacramento as well as the University of California, Berkeley and Pasadena's California Institute of Technology.