While they could save your life, the systems can fail under many circumstances. 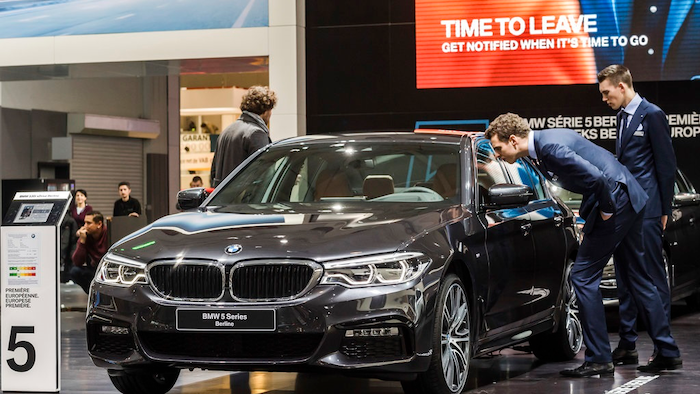 In this Jan. 13, 2017, file photo men look at a BMW 5 series during the media day of the 95th European Motor Show in Brussels. The Insurance Institute for Highway Safety, in a paper titled “Reality Check,” issued the warning Tuesday, Aug. 7, 2018, after testing five of the systems from Tesla, Mercedes, BMW and Volvo on a track and public roads. The systems tested, in the Tesla Model 3 and Model S, BMW’s 5-Series, the Volvo S-90 and the Mercedes E-Class, are among the best in the business right now and have been rated “superior” in previous IIHS tests. David Zuby, the institute’s chief research officer, said the systems do increase safety but the tests show they are not 100 percent reliable.
AP Photo/Geert Vanden Wijngaert, File

DETROIT (AP) — Cars and trucks with electronic driver assist systems may not see stopped vehicles and could even steer you into a crash if you're not paying attention, an insurance industry group warns.

The Insurance Institute for Highway Safety, in a paper titled "Reality Check," issued the warning Tuesday after testing five of the systems from Tesla, Mercedes, BMW and Volvo on a track and public roads. The upshot is while they could save your life, the systems can fail under many circumstances.

"We have found situations where the vehicles under semi-automated control may do things that can put you and your passengers at risk, and so you really need to be on top of it to prevent that from happening," said David Zuby, the institute's chief research officer.

Among the scariest found by the Virginia-based institute was with the system in two Tesla vehicles, the Model S and Model 3. The institute tested the system with the adaptive cruise control turned off, but automatic braking on. At 31 miles per hour, both Teslas braked and mitigated a crash but still hit a stationary balloon. They were the only two models that failed to stop in time during tests on a track.

Yet when the adaptive cruise control, which keeps a set distance from cars in front, is activated, the Teslas braked earlier and gentler and avoided the balloon, the agency said.

On the road, the institute's engineers found that all the vehicles but Tesla's Model 3 failed to respond to stopped vehicles ahead of them, the institute said.

The systems tested, in the Teslas, BMW's 5-Series, the Volvo S-90 and the Mercedes E-Class, are among the best in the business right now and have been rated "superior" in previous IIHS tests. Zuby said the systems do increase safety but the tests show they are not 100 percent reliable.

Many of the scenarios discovered by IIHS are covered in the vehicles' owner's manuals, which tell drivers they have to pay attention. But Zuby said not many people read their owner's manuals in detail. Even though the systems have names like Tesla's "Autopilot" or Volvo's "Pilot Assist," they are not self-driving vehicles, Zuby said. "They will help you with some steering or speed control but you really better be paying attention because they don't always get it right," he said.

Many of the cars' lane-centering systems failed, especially on curves or hills. The BMW, Model S and Volvo "steered toward or across the lane line regularly," requiring driver intervention, the IIHS said.

The IIHS-affiliated Highway Loss Data Institute analyzed Tesla insurance losses to find that automatic braking and other crash avoidance features on the Model S were helpful in reducing property damage and bodily injury claims. But adding "Autopilot," which includes automatic steering and lane-changing, only helped to lower collision claims.

The institute, which in the past has developed tests that made the auto industry strengthen vehicle structures, also said the California crash of a Tesla Model X SUV in March that killed a man shows the limits of the technology and the tendency of some drivers to misuse it.

Messages were left Monday seeking comment from the automakers.