The experience recreates the sights and sounds of Hiroshima before, during and after the U.S. dropped an atomic bomb. 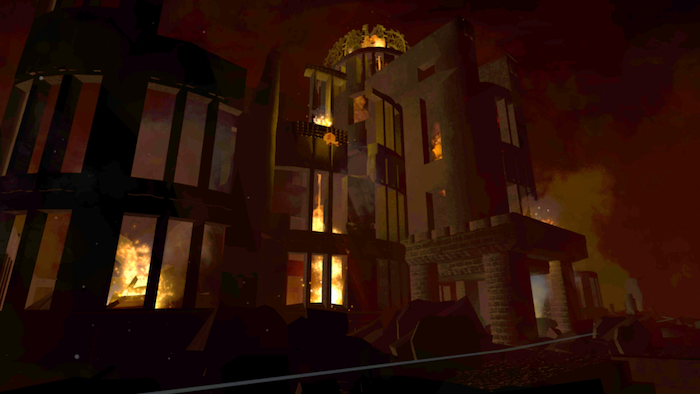 This computer graphic image provided by Fukuyama Technical High School shows a burning building just after an atomic bomb fell in Hiroshima, western Japan. Over two years, a group of students at the school has been painstakingly producing a five-minute virtual reality experience that recreates the sights and sounds of Hiroshima immediately before, during and after the U.S. dropped an atomic bomb on the city 73 years ago.
Fukuyama Technical High School via AP

FUKUYAMA, Japan (AP) — It's a sunny summer morning in the city of Hiroshima, Japan. Cicadas chirp in the trees. A lone plane flies high overhead. Then a flash of light, followed by a loud blast. Buildings are flattened and smoke rises from crackling fires under a darkened sky.

Over two years, a group of Japanese high school students has been painstakingly producing a five-minute virtual reality experience that recreates the sights and sounds of Hiroshima before, during and after the U.S. dropped an atomic bomb on the city 73 years ago Monday.

By transporting users back in time to the moment when a city was turned into a wasteland, the students and their teacher hope to ensure that something similar never happens again.

"Even without language, once you see the images, you understand," said Mei Okada, one of the students working on the project at a technical high school in Fukuyama, a city about 100 kilometers (60 miles) east of Hiroshima. "That is definitely one of the merits of this VR experience."

Wearing virtual reality headsets, users can take a walk along the Motoyasu River prior to the blast and see the businesses and buildings that once stood. They can enter the post office and the Shima Hospital courtyard, where the skeletal remains of a building now known as the Atomic Bomb Dome stand on the river's banks, a testament to what happened.

The students, who belong to the computation skill research club at Fukuyama Technical High School, were born more than half a century after the bombing. Yuhi Nakagawa, 18, said he initially didn't have much interest in what happened when the bombs were dropped; if anything, it was a topic he had avoided.

"When I was creating the buildings before the atomic bomb fell and after, I saw many photos of buildings that were gone. I really felt how scary atomic bombs can be," he said. "So while creating this scenery, I felt it was really important to share this with others."

To recreate Hiroshima, the students studied old photographs and postcards and interviewed survivors of the bombing to hear their experiences and get their feedback on the VR footage. They used computer graphics software to add further details such as lighting and the natural wear and tear on building surfaces.

"Those who knew the city very well tell us it's done very well. They say it's very nostalgic," said Katsushi Hasegawa, a computer teacher who supervises the club. "Sometimes they start to reminisce about their memories from that time, and it really makes me glad that we created this."

The students are working through summer vacation in a classroom without air conditioning, as temperatures reach 35 degrees Celsius (95 degrees Fahrenheit). With the survivors aging, Hasegawa said, it's a race against time.