The pilot controls the drone with his torso. 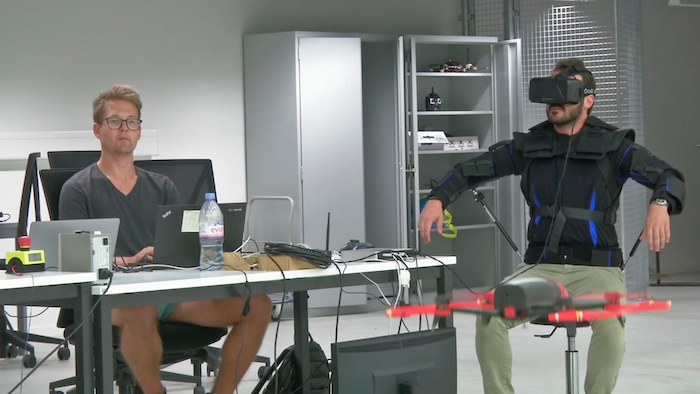 Robotics expert on the Ecole Polytechnique Federal de Lausanne, EPFL team, Matteo Macchini, right, displays the fly controls in a virtual reality scenario as he controls the flight of a drone in foreground, while observed by a fellow member of the team, July 23, 2018, in Lausanne, Switzerland. Scientists, engineers and robotics experts at the Swiss university have teamed up to develop a jacket that allows hands-free, torso-controlled flying of drones.
Ecole Polytechnique Federale De Lausanne via AP

LAUSANNE, Switzerland (AP) — Ever dreamt of flying without flapping wings, airplanes, hand-gliders or wing suits — just soaring free over the landscape with arms outstretched like Superman?

Thanks to virtual reality and advanced motion sensors, drone pilots can now experience something close to that imaginary sensation.

Scientists, engineers and robotics experts at a Swiss university have developed a jacket that allows users to fly drones hands-free: the drone is controlled simply by moving one's torso. 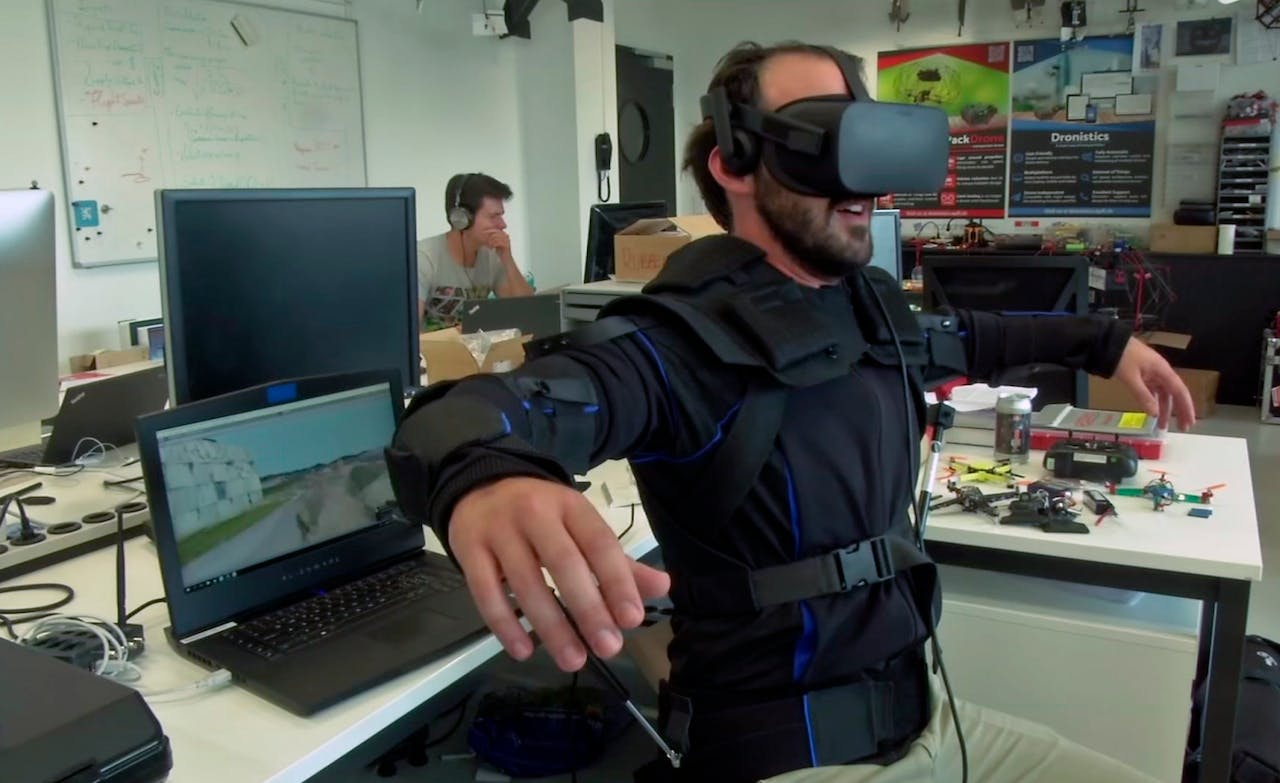 Robotics expert on the Ecole Polytechnique Federal de Lausanne, EPFL team, Matteo Macchini, displays the fly controls in a virtual reality scenario as he controls the flight of a drone, July 23, 2018, in Lausanne, Switzerland. Scientists, engineers and robotics experts at the Swiss university have teamed up to develop a jacket that allows hands-free, torso-controlled flying of drones.Ecole Polytechnique Federale De Lausanne via AP

The team at Ecole Polytechnique Federal de Lausanne hopes the technology could one day be used by rescuers, farmers, Hollywood camera crews and beyond.

"Our aim was to design a control method which would be easy to learn and therefore require less mental focus from the users so that they can focus on more important issues, like search and rescue," said Jenifer Miehlbradt of EPFL's Translational Neuroengineering Laboratory.

"Using your torso really gives you the feeling that you are actually flying," she said.

The teams at the came up with the idea after challenging the belief that joysticks and hand-operated controls are the only or main way that mankind can fly.

Instead, they figured that the body's own movements, if properly mirrored, could do the main work — freeing up not only the eyes to look around like those of an eagle searching for prey, but also unencumber hands and fingers that could do other things.

In fact, their studies showed the torso system is easier to learn and more precise than a joystick.

In mid-July, the team published a paper in the Proceedings of the National Academy of Sciences in the U.S. explaining the development.

The flying isn't all that developed yet — don't ask for loop-de-loop acrobatics — but the system appears on track. The jacket isn't fully autonomous yet, and the drones require a second operator to regulate the speed.

The system relies on an increasingly commonplace motion sensor that clicks into the back of a flexible, black, Velcro-strapped jacket. Adjustable metal bars can be used to prop up the arms to reduce fatigue of pilots seeking an out-stretched arm sensation. It is incredibly easy to use, if a bit dizzying at first, in the VR world of EPFL's campus.

The team uses drone testing labs to fly the drones in virtual worlds. During a demonstration, Matteo Macchini, a robotics expert on the EPFL team, showcased how a prototype glove allows for some extra controls.

"To control the height and the yaw of the drone, you can use your body," said Macchini, while wearing the jacket and glove in a drone testing lab. "But for high level controls — like controlling the speed and taking off and landing — we designed and prototyped a data glove ... to increase the speeds and decrease the speeds, take off and land, and just take some interesting positions that you might find on the fields."

Experts pinpointed and mimicked how the torso works by affixing lightweight, round infrared markers about the size of marbles on the body of a subject sitting in the middle of a ring of infrared cameras, and collecting the data.

"To develop this system, to have the opportunity to make as many tests as we want, we started in virtual reality," said Miehlbradt in Geneva, while demonstrating the infrared monitoring systems. She cruised easily through orange-colored target clouds in the VR world using her body.

"Later on, we had colleagues who translated this into a really wearable system which is much more convenient to use," she said.

The developments are part of Switzerland's ambitions to become a world "home of drones," part of a three-year marketing project launched in the spring that aims to one day make the small, rich Alpine country known for drones as it is for chocolates and watches today.

The government says more than 2,500 people in 80 companies work in digital aviation in Switzerland, and Swiss drones are used in public safety, agriculture and humanitarian aid efforts in crisis-hit areas.