'Interference' Can't Be Ruled Out in Flight's Disappearance

The plane was deliberately diverted and flown for over seven hours after severing communications. 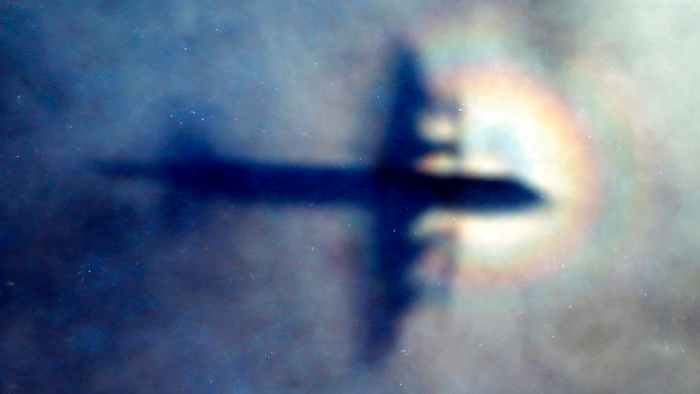 In this March 31, 2014 file photo, the shadow of a Royal New Zealand Air Force P3 Orion is seen on low level cloud while the aircraft searches for missing Malaysia Airlines Flight MH370 in the southern Indian Ocean, near the coast of Western Australia. An independent investigation report released Monday, July 30, 2018, more than four years after Malaysia Airlines Flight 370 disappeared highlighted shortcomings in the government response that exacerbated the mystery.
AP Photo/Rob Griffith, File

The report, prepared by a 19-member international team, reiterated Malaysia's assertion the plane was deliberately diverted and flown for over seven hours after severing communications.

Chief investigator Kok Soo Chon said the cause of the disappearance cannot be determined until the wreckage and the plane's black boxes are found. He said there was no evidence of abnormal behavior or stress in the two pilots that could lead them to hijack the plane but all passengers were also cleared by police and had no pilot training.

"We are not of the opinion that it could be an event committed by the pilot," Kok told a media briefing.

"We cannot rule out unlawful interference by a third party," such as someone holding the pilots hostage, he said. But he added that no group has said it hijacked the plane and no ransom demands have been made, compounding the mystery. Kok said it was up to police to investigate.

He said the investigation showed lapses by air traffic control, including a failure to swiftly initiate an emergency response and monitor radar continuously, relying too much on information from Malaysia Airlines and not getting in touch with the military for help.

The plane carrying 239 people from Kuala Lumpur to Beijing vanished March 8, 2014, and is presumed to have crashed in the far southern Indian Ocean. The report said there was insufficient information to determine if the aircraft broke up in the air or during impact with the ocean.

Scattered pieces of debris that washed ashore on African beaches and Indian Ocean islands indicated a distant remote stretch of the ocean where the plane likely crashed. But a government search by Australia, Malaysia and China failed to pinpoint a location. And a second, private search by U.S. company Ocean Infinity that finished at the end of May also found no sign of a possible crash site.

Family members of those on board the plane said after a briefing by the investigation team that they were frustrated because there were many gaps in the probe and questions left unanswered.

"There is nothing new but it highlighted failings of some government agencies" that did not follow protocol and guidelines, said Grace Nathan, whose mother was on board the plane.

She said the scope of the safety investigation was also too limited, depended too much on information supplied to them by other parties rather than on their own probe, and didn't discuss the scope of the searches.

"But still, it cannot end here. They have to continue the search until they find the plane," she said.

Officials said Monday's report is still not a final accounting because the plane hasn't been found. Malaysia's government has said it is open to resume searching if credible evidence of the plane's location emerges.

The "rogue pilot" theory still arises in public discussions despite Malaysian authorities saying there was no evidence linking Zaharie or his co-pilot, Fariq Abdul Hamid, to any wrongdoing.

Kok said it was "human nature" to speculate on sensational conspiracy theories but that the team relied on facts.

He said police retrieved over 2,700 coordinates from various file segments found in Zaharie's home flight simulator. This included seven "manually programmed waypoint coordinates" that when linked could fly from the Kuala Lumpur airport to the southern Indian Ocean, but police could not determine if the coordinates were found in a single file or from different files, he said.

Police didn't find any data that showed a similar route flown by Flight 370 and concluded that there were "no unusual activities other than game-related flight simulations," Kok said.

He said investigators couldn't find any flaws with the plane and dismissed the theory that it was remotely controlled. Boeing has such technology to foil plane hijacking but hasn't used it on any commercial planes, he added.

New Malaysian Transport Minister Anthony Loke said the government will investigate and take action against any misconduct based on the report findings.

Co. Wants to Search for Plane