Amazon Has Fun with Glitches

Prime Day had its problems. 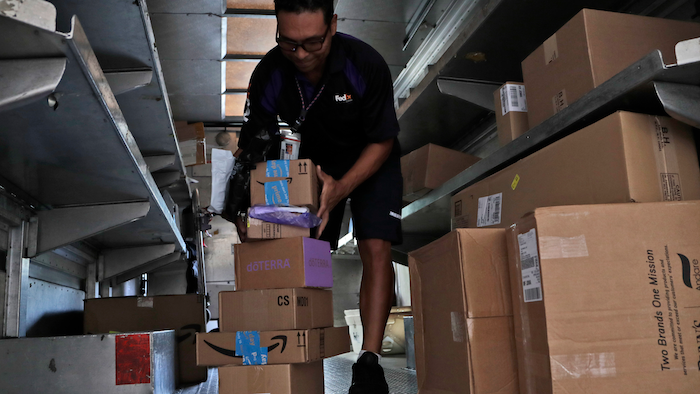 In this Tuesday, July 17, 2018 photo, a FedEx employee delivers packages in Miami. Amazon Prime Day was launched July 16 and and will be six hours longer than last year's and will launch new products.
AP Photo/Lynne Sladky

NEW YORK (AP) — Amazon poked fun at the early glitches it saw with Prime Day, though it said shoppers still found plenty to buy. Analysts, meanwhile, saw other things Amazon could have done better, like discounting more fashion brands and taking more advantage of its acquisition of Whole Foods.

Early problems Monday sent shoppers to social media to complain after their attempts to click on Prime Day deals returned only images of dogs with an apologetic message. The snags were an embarrassment for the tech company on the much-hyped shopping holiday it created.

"It wasn't all a walk in the (dog) park, we had a ruff start — we know some customers were temporarily unable to make purchases," Amazon said in a statement.

But Amazon touted Prime Day growth and said shoppers still found lots to buy, with tech gadgets in particular among the most popular. It said top sellers included some of its own devices — the Fire TV stick with Alexa Voice Remote, Echo Dot and Fire 7 tablet with Alexa. Others included a water filter for hiking and the multi-use Instant Pot.

The hiccups, though, could have sent shoppers elsewhere during a key period for Amazon to sign up new Prime members. It recently announced that the cost of Prime membership would go up, and the shopping day is a way to prove the value. Many other chains offered sales and promotions to try to capitalize on the day. And industry observers said Amazon could have done a better job in several areas, such as offering personalized recommendations.

"For all the hype about Whole Foods, the grocery stuff on sale was less appetizing," said Sucharita Mulpuru-Kodali, an analyst at Forrester Research. "No Prime Day specials at the store."

She also said some of the products Amazon's site was pushing were a little odd, like urinal splash guards in the health section. She also believes Amazon should have started the sale at midnight instead of the middle of the day to reduce the rush of traffic on the site.

Gary Liu, vice president of marketing at Boomerang Commerce, said he believes shoppers got a "vanilla" experience when it came to personalization. He said Amazon heavily promoted its own devices and its own brands but he wanted to see heavier promotions on national-label fashions.

"Shoppers are looking for something more familiar," he added.

While Amazon doesn't disclose sales figures for Prime Day, Deborah Weinswig, CEO of Coresight Research, had estimated before it began that it will generate $3.4 billion in sales worldwide, up from an estimated $2.4 billion last year.

In Europe, Amazon employees were using Prime Day to draw attention to their complaints against the company. Unions in Spain said most of the company's 2,000 permanent staff there were on a three-day strike on Tuesday.

Amazon created Prime Day in 2015 to mark its 20th anniversary, and its success has inspired other e-commerce companies to invent shopping holidays. Amazon disclosed for the first time this year that it had more than 100 million paid Prime members worldwide.

It's hoping to keep Prime attractive for current and would-be subscribers after raising the U.S. annual membership fee by 20 percent to $119 and to $12.99 for the month-to-month option.