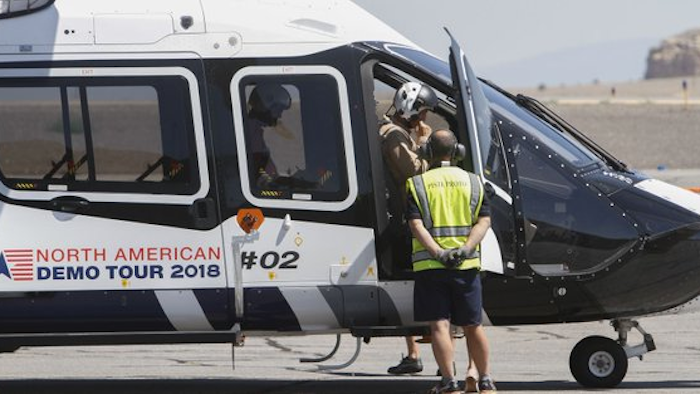 FARMINGTON, N.M. (AP) — A France-based helicopter company came to test a prototype helicopter at the Four Corners Regional Airport in Farmington, New Mexico, where mid-altitude conditions and warm weather can be found.

The test is necessary so Airbus Helicopters' H160 can receive certification from the Federal Aviation Administration and the European Aviation Safety Agency, Certain said.

Prior to visiting Farmington, the crew tested the H160 helicopter in the hot temperatures of Lake Havasu, Arizona. Its next stop will be Leadville, Colorado, where the crew will test its ability to fly at high altitude.

The U.S. has testing sites more suitable for those tests than Europe, said Olivier Gensse, an experimental test pilot.

"We have some conditions, but not such as we can find in the United States," he said.

Airbus hopes to get the helicopter certified so it can start selling it by 2019.

The craft could have various uses, including military, commercial and emergency medical services, Gensse said.

The helicopter is designed to have the ability of a lighter aircraft and the systems of a heavier aircraft.

It is designed to be simple to fly because most crashes are caused by human error, Gensse said.