The information will help better understand the history of the universe. 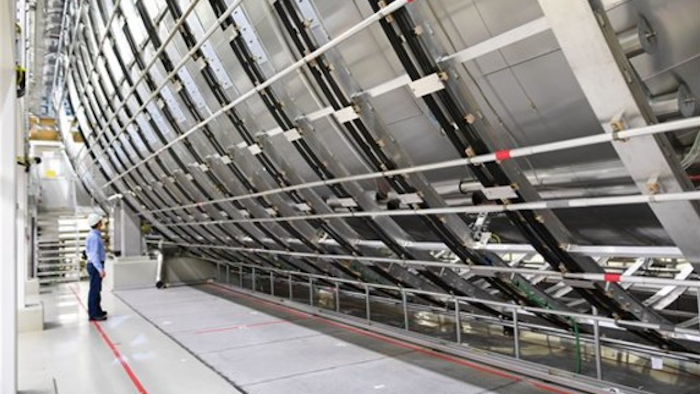 Scientist Thomas Thuemmler, stands next to the main spectrometer of the Karlsruhe Institute for Technology, near Karlsruhe Germany.
Uwe Anspach/dpa via AP

BERLIN (AP) — Researchers in Germany have started collecting data with a 60 million euro ($71 million) machine designed to help determine the mass of the universe's lightest particle.

Physicists, engineers and technicians at the Karlsruhe Institute of Technology hope the 200-metric ton (220-ton) device will narrow down or even pinpoint the actual mass of neutrinos. Those are sometimes called "ghost particles" because they're so difficult to detect.

Scientists with the Karlsruhe Tritium Neutrino experiment, or KATRIN, said Monday they'll be taking measurements "well into the next decade" and hope to produce "high-impact results."

Researchers say determining the mass of neutrinos is one of the most important open questions in particle physics and will help scientists better understand the history of the universe.

Some 200 people from 20 institutions in seven countries are working on the project.

And it's surprisingly cool and futuristic.
Apr 14th, 2021
Follow Us
Most Recent