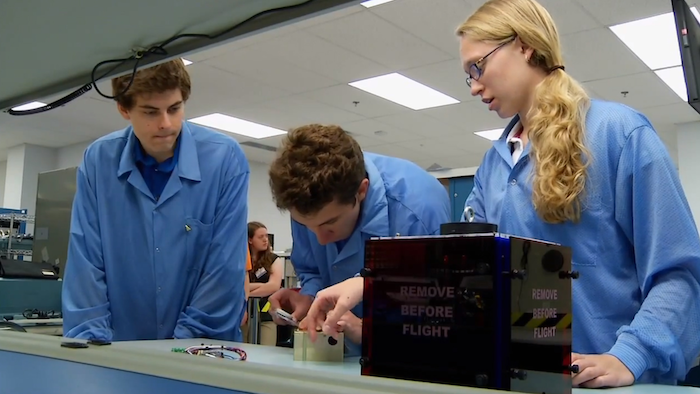 Should schools be charged large sums to teach students about space science?
NASA

There are only a handful of astronauts, but every year thousands of high school and college students get to visit space vicariously, by launching their own satellites. Students design, build and test each one, and then work with space industry professionals to get them loaded on rockets and launched into orbit.

But this opportunity – available to students and educators for more than 30 years – may not continue much longer, as the Federal Communications Commission considers hiking communications licensing fees beyond the reach of most students and schools.

In a move that threatens U.S. education in science, technology, engineering and math, and could have repercussions throughout the country’s aerospace industry, the FCC is proposing regulations that may license some educational satellite programs as commercial enterprises.

That could force schools to pay a US$135,350 annual fee – plus a $30,000 application fee for the first year – to get the federal license required for a U.S. organization to operate satellite communications.

It would be a dramatic increase in costs. The most common type of small satellite used in education is the U.S.-developedCubeSat. Each is about 10 inches on a side and weighs 2 or 3 pounds. A working CubeSat that can take pictures of the Earth can be developed for only $5,000 in parts.

They’re assembled by volunteer students and launched by NASAat no charge to the school or college. Currently, most missions pay under $100 to the FCC for an experimental license, as well as several hundred dollars to the International Telecommunications Union, which coordinates satellite positions and frequencies.

U.S. CubeSat programs have been a model for space education programs around the world. In our work in North Dakota, we’ve seen the power of satellites to excite and engage students. And we’re not alone. Hundreds of CubeSats have given students hands-on experience, even reaching elementary schools, to get younger students interested in, and connected to, engineering and space science. In my view, the FCC should protect all this by making clear what fees apply to school and university missions, and ensuring the cost is much lower than $135,350.

In recent months, the FCC has correctly noted that the “United States continues to be the leader in the number of small satellites launched,” and praised small satellite programs’ “promise as a driver of innovation.”

Indeed, whether they are starting a business or conducting cutting-edge research, giving students and teachers the “freedom to fail” in small satellite projects lets them learn and take risks that yield big technological leaps. One student spacecraft design at Stanford, for example, challenged the physical principles that underlie optical imaging. CubeSats also allow institutions – and even countries – with smaller budgets to discover what’s possible in, and from, space.

Those advances have helped establish the United States’ lead in satellite technology in a “commercial space race” that has dramatically lowered the cost of commercial spacecraft and “revolutionized” how satellites are used. Today, satellites serve an enormously wide range of purposes, including tracking ships at sea, helping deliver medicine, bringing aid to hikers and securing borders – in addition, of course, to helping millions of people figure out exactly where they are at any given moment.

Representatives of aerospace companies, universities, the military, NASA and other government agencies are preparing to attend August’s AIAA/USU Conference on Small Satellites, better known as “SmallSat,” focusing on university satellite missions. As that event approaches, a group of prominent researchers has written a arguing that the annual fee, in particular, “will effectively prevent universities” from being able to launch satellites under these new rules. Unfortunately, the FCC is only accepting comments on that fee as part of a future wider review of regulatory costs.

There are two potential alternatives to paying the fee, but neither is definitely applicable to all educational CubeSat missions. For instance, the FCC’s experimental license allows “scientific and research missions for the purposes of experimentation, product development, and market trials.” That doesn’t seem to cover missions whose primary objective is student learning.

Some other missions might qualify as amateur satellites, but those licenses largely bar operators from running a satellite on behalf of an employer. It’s not clear that people who work for a school or university would be exempt.

In fact, the FCC’s proposal specifically includes language about educational and university research missions that causes many in the small satellite community concern that at least some – and possibly most – of them will have to pay to fly. That’s particularly true for educational projects that receive commercial sponsorships or have some commercial potential, even if their primary focus is education.

In my view, charging these fees will reduce educational opportunities for students by demanding schools and universities pay money they don’t have. It will also reduce the number of graduates entering the workforce with these skills and slow the flow of new ideas and research generated by these programs. Instead, the FCC should make clear that educational missions – even ones that accept corporate support – are exempt from the new fees, either under the existing experimental model or under a new one.