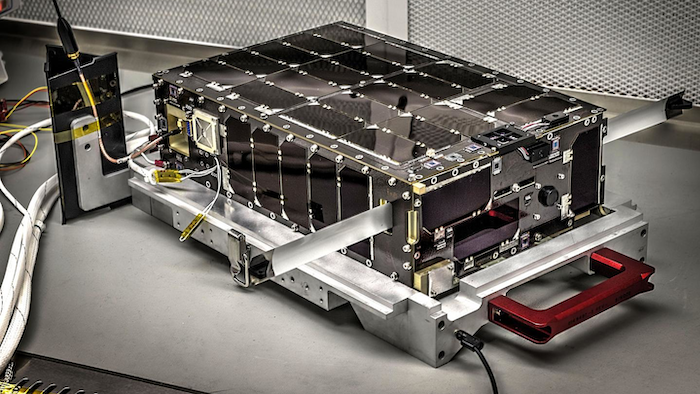 Dellingr's exterior is lined with solar panels. Slighty larger than a cereal box, Dellingr is a six-unit, or 6U, CubeSat -- indicating its volume is approximately six liters.
NASA's Goddard Space Flight Center/Bill Hrybyk

Construction of NASA's Dellingr CubeSat - a miniature satellite that provides a low-cost platform for missions - is complete, and the satellite has just left the lab for environmental testing.

This is a key step after any satellite has been built to make sure it can withstand intense vibrations, the extremes of hot and cold, and even the magnetic fields of space - all the rigorous conditions the CubeSat will encounter during launch and spaceflight.

Named for the god of dawn in Norse mythology, Dellingr will study the ionosphere - the outer region of Earth's atmosphere populated by charged particles, ionized by incoming solar radiation and magnetospheric particle precipitation. The magnetosphere is Earth's magnetic environment, and sometimes, charged particles in this region are deposited into the atmosphere below.

These instruments will help Dellingr create a chemical and electromagnetic profile of Earth's outer atmosphere, an important component of the complex interconnected sun-Earth system - which can drive changes in our space weather and impact satellites.

They also allow an inexpensive means to engage students in all phases of satellite development, operation and exploitation through real-world, hands-on research and development experience on NASA-funded ride-share launch opportunities.