Photographs of the car show that its backend was destroyed, its hood crumpled and windows shattered. 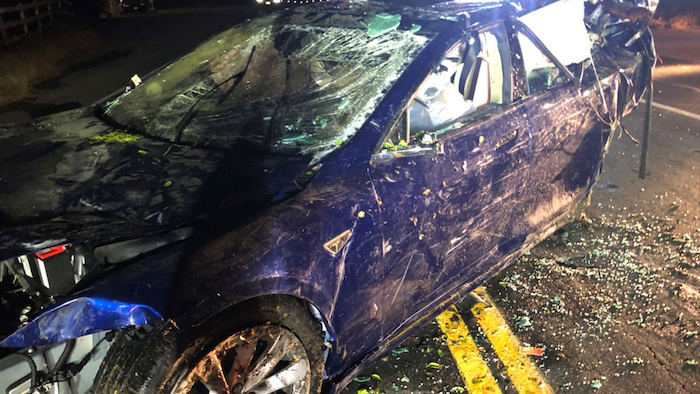 This photo provided by NBC Bay Area-KNTV shows a Tesla car after it was pulled from a pond near the city of San Ramon, Calif., on Monday, May 21, 2018. Authorities in the San Francisco Bay Area are investigating the death of a man after the Tesla car he was driving veered off a road, crashed through a fence and into a pond.
Bob Rendell/NBC Bay Area/KNTV via AP

CASTRO VALLEY, Calif. (AP) — A man was killed when the Tesla automobile he was driving veered off a road, crashed through a fence and plunged into a pond, authorities said Monday (view photos in gallery).

Kelly said it was too soon to know if the vehicle's semi-autonomous Autopilot mode was engaged when the crash occurred or whether the driver may have been speeding or intoxicated.

Photographs of the car show that its backend was destroyed, its hood crumpled and windows shattered.

The crash occurred near the cities of San Ramon and Danville on Sunday evening, Jacowitz said. A property owner contacted authorities after hearing a noise and seeing damage to his fence and tire tracks.

The car was traveling at a speed "great enough to leave the roadway, hit a fence, keep going down an embankment and into a pond on the property," Jacowitz said.

Federal transportation authorities have been investigating if the Tesla's Autopilot mode has played a role in other recent crashes.

In March, the driver of a Tesla Model X was killed in California when his SUV hit a barrier while traveling at "freeway speed." The National Highway Traffic Safety Administration and the National Transportation Safety Board are investigating that case, in which the Autopilot system was engaged.

Autopilot was also engaged in a crash earlier this month in Utah, according to data from the car.

Also this month, the NTSB opened a probe into an accident in which a Model S caught fire after crashing into a wall at a high speed in Florida. Two 18-year-olds were trapped in the vehicle and died in the flames. The agency has said it does not expect Autopilot to be a focus in that investigation.

Autopilot is the most well-known semi-autonomous system. It uses cameras and sensors on the front, sides and rear of the car to observe lane markings and to "see" other cars that are nearby. It's simple to engage, requiring only two quick taps of a stalk. There are no limitations on where Autopilot can be used. Drivers can enable it on the freeway, side streets, or anywhere with distinct lane markings.