Japanese companies are among the world's top automakers, but some are worried whether they can maintain that lead amid major technological shifts that allow the entry of newcomers. 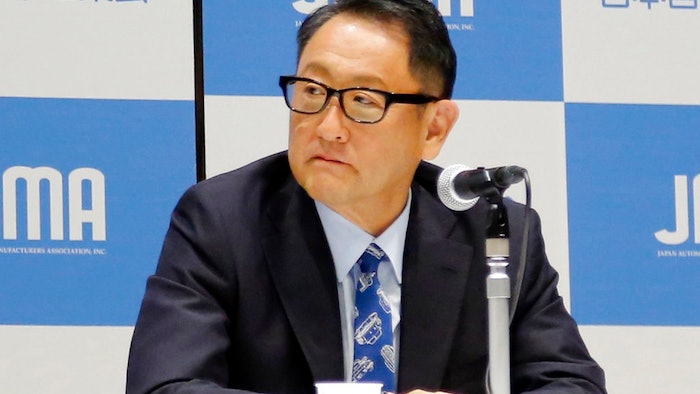 Japanese companies are among the world's top automakers, but some are worried whether they can maintain that lead amid major technological shifts that allow the entry of newcomers, including those outside the auto sector.

Toyoda, the new chairman of the 14-member Japanese Automobile Manufacturers Association, acknowledged that new competitors have plentiful cash and tend to be quick. He did not give examples, but among such big names are Google Inc., with its Waymo self-driving car spinoff, and ride-hailing service Uber.

"Whether we can stay competitive is an important challenge for Japanese automakers," he told reporters, adding that he views the new technologies as opportunities. "Japan is not falling behind."

Toyoda said Japan leads the world in "electrified vehicles," including hybrids and plug-ins with pure electric vehicles, and isn't lagging behind China, more widely associated with the electric-car drive.

Although China has far more electric cars on its roads than does Japan, hybrid vehicles are extremely popular in Japan. Toyota, which recently reported record profits for the fiscal year through March, makes the world's best-selling hybrid, the Prius. Hybrids have gasoline engines in addition to electric motors, and aren't zero-emission.

Toyoda, the grandson of Toyota's founder, is the first to lead the industry group twice, having served from 2012 to 2014.

Toyoda said the high cost of car ownership in Japan, including taxes, parking and insurance, must come down to reverse the longtime decline in the domestic market.

He hopes to be a kind of cheerleader for the industry, referring to his nickname Morizo, which he uses for his blog and car-racing events.

"I'm not boasting or anything, but I want to fully leverage that iconic image I have earned as a true car lover," he said.

May 11th, 2016
Latest in Product Development