It would add an average $10,500 in construction costs for a single-family home. 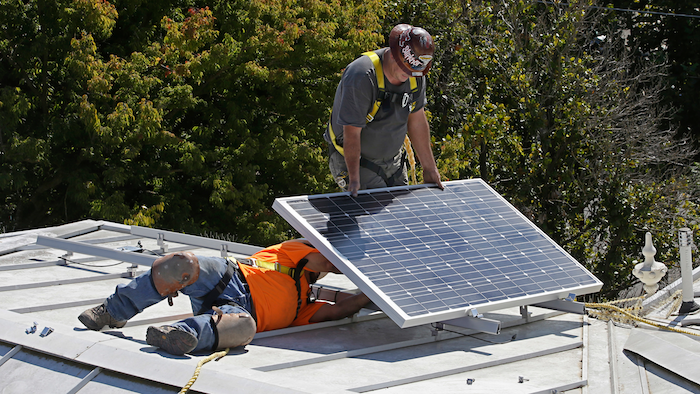 In this Oct. 16, 2015 file photo a solar panel is installed on the roof of the Old Governor's Mansion State Historic Park in Sacramento, Calif. After extensive renovations, Gov. Jerry Brown and his wife, Anne Gust Brown moved into the mansion in late 2015, becoming the first chief executive to live in the home since Ronald Reagan in 1967. The California Energy Commission will take up a proposal, Wednesday, May 9, 2018 , to require solar panels on new residential homes and low-rise apartment buildings up to three starting in 2020.
AP Photo/Rich Pedroncelli, File

The California Energy Commission, which will vote on the regulations Wednesday, estimates they would add an average $10,500 in construction costs for a single-family home but generate about $16,000 in energy savings. The standards also include requirements around ventilation and indoor air quality.

California has positioned itself as the nationwide leader on clean energy, pushing for more electric vehicles on the roads and fewer emissions from residential and commercial buildings.

"This is going to be an important step forward for our state to continue to lead the clean energy economy," said Kelly Knutsen, director of technology advancement for the California Solar and Storage Association.

Few industry groups outwardly oppose the plan after working for years with the commission to shape the regulations. But Republican legislative leaders said Californians can't afford to pay any more for housing in the state's already extremely expensive market.

"That's just going to drive the cost up and make California, once again, not affordable to live," said Assemblyman Brian Dahle, the chamber's Republican leader.

It does include exceptions when requiring solar panels isn't feasible — such as on a home shrouded in shade — or cost effective. Installing storage batteries or allowing community-shared solar generation are available options. The requirement would only apply to newly constructed homes, not existing ones, although many homeowners are choosing to install solar panels with the help of rebate programs.

The California Building Industry Association supports the solar panel requirement after years of working with the energy commission to refine it, said Robert Raymer, the association's technical director.

"On the one hand, we would prefer that this had been put off for a few more years, but the fact is that the California Energy Commission has been working on this, with us, for the past 10 years," he said. "We know this is coming, we did everything we could to push down compliance costs and increase design flexibility."