Dr. Harvey Karp worked on the Snoo with engineers from the MIT Media Lab and designer Yves Behar. 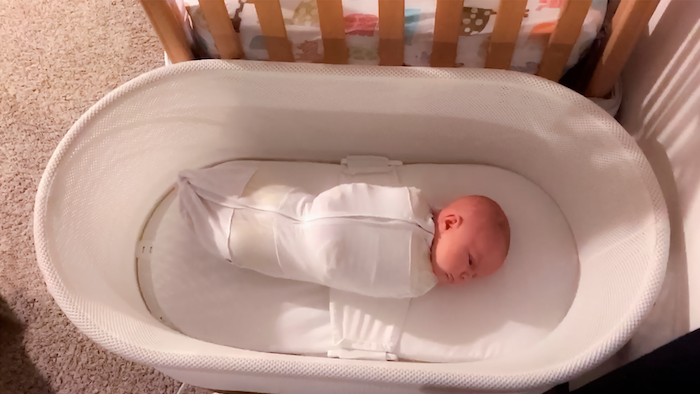 This Jan. 3, 2017 photo released by Paul Zalewski shows his infant daughter Ruby in a smart-tech sleeper called the Snoo, which gently rocks and jiggles babies to sleep from birth to 6 months old.
Paul Zalewski via AP

So declares Dr. Harvey Karp, a Los Angeles pediatrician whose smart-tech baby sleeper, the Snoo, is a game-changer for some sleep-deprived parents.

The Snoo is all about swaddling. Just don't call it a bed.

In a video on his website, Papa Karp says the Snoo provides a service "more than being a thing." It gently rocks and jiggles babies from birth to 6 months old, a period he calls the "fourth trimester," when — he believes — simulating the womb environment is key to calming babies.

Babies are zipped into a mesh sleep sack after a broad cotton swaddle tightly pins the infant's arms to the side from shoulder to wrist. The sack is then secured to the Snoo's frame before the rocking and a white-noise lullaby commence.

Karp, who's also written a book, "The Happiest Baby on the Block," says infants should be soothed in 40 to 60 seconds. The Snoo increases its motion and noise based on persistent sound from the baby, until it reaches its fourth and final level. If that doesn't work, it turns off. Parents can adjust settings manually or with an app. The Snoo also comes with an organic cotton sheet and sleep sacks in three sizes.

But at $1,160, the Snoo more expensive than many rocking devices — though designer baby beds can run higher.

New York mom Kathleen Udo heard about the Snoo and "thought, 'Wow, that sounds great, sign me up,' until I looked at the price. I was, like, 'Get out of town.'"

Then her son Jack, now 3 months old, was born. Parental fatigue set in and she found a mommy friend with a Snoo to lend.

"My little terrorist over here wouldn't sleep. Even with the Snoo, we've only gotten to about four hours at a stretch at night," said Udo, who is an attorney. "I'm going back to work in mid-June and I need to be back on my A-game. The Snoo was a desperation move."

Karp says babies who aren't put in the Snoo from birth have a learning curve, and that was the case with Jack. But, says Udo, "It definitely calms him. I don't rock him anymore."

Jamee Zalewski of Denver tried the Snoo with her second child Ruby. "The mental break was really important for me," she said. "I was able to take it because I knew the Snoo's soothing would shut off if Ruby needed me. I could watch it on my phone and get an alert."

Her husband Paul, who blogs about baby gear at Fathercraft.com, said they sometimes wondered, "'Are we letting a robot do our job?' There were these moments when we would walk away after Ruby fell asleep and we'd be like, 'We should be doing something.'"

While the Zalewskis did become Snoo fans, they opted to return the device before the 30-day trial period was up. The reason: Ruby was colicky and congested and needed to sleep on an incline. The company has since added leg lifts so it can be adjusted.

Karp worked on the Snoo with engineers from the MIT Media Lab and designer Yves Behar. He says the Snoo also promotes safety, by keeping babies in the supine position recommended for sleep by the American Academy of Pediatrics, and by making it unnecessary for sleep-deprived parents to bring babies into their own beds. About 3,500 infants in the United States die suddenly and unexpectedly each year, according to the U.S. Centers for Disease and Control, and the causes include accidental suffocation in a parent's bed.

Getting babies to sleep soundly can also reduce postpartum depression and marital stress. "The No. 1 stress that new parents talk about is exhaustion," Karp said.

Karp's team works with companies offering rented Snoos to parents returning to work, foster parents and doctors treating babies born to drug-addicted mothers. He is also working on a plan to offer Snoos for rent at reasonable cost.

At the University of Kentucky Children's Hospital in Lexington, 10 Snoos are available for babies with the addiction and withdrawal condition called neonatal abstinence syndrome, in a state where 15 of every 1,000 babies is born dependent on opioids. Such babies routinely experience disrupted sleep, said Dr. Lori A. Shook, a neonatologist there. Before she stumbled on the Snoo at a pediatrics conference, she'd notice the babies in the eight-bed unit fussing terribly in their bassinets.

The Snoos are used in addition to aromatherapy and massage for calming, in a unit that focuses on families caring for their babies.

"Now on rounds I see every baby asleep in their Snoo bed," Shook said. "At first I think the nurses were leery because of the motion, but now we realize it also allows families to sleep better, and hopefully get the babies out of the hospital sooner and with less medication."