Iconic Pen Used by Military, Made by Blind People, Turns 50

The pens have stringent requirements — 16 pages worth. 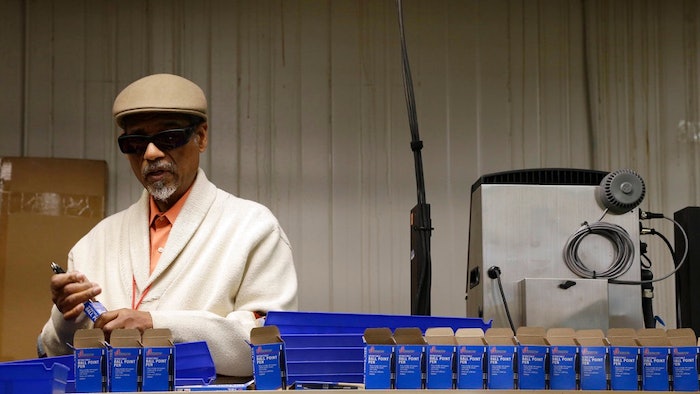 n this April 16, 2018, photo, employee Clifford Alexander Sr. boxes SKILCRAFT pens for the U.S. Government at the Industries of the Blind in Greensboro, N.C. The ubiquitous SKILCRAFT U.S. Government pens turning 50 this month. National Industries for the Blind traces the pen’s history to April 20, 1968, when it was introduced to government buyers.
AP Photo/Gerry Broome

GREENSBORO, N.C. (AP) — Clifford Alexander scoops a handful of black ballpoint pens, drops them into a small box and shakes it with a blackjack dealer's nonchalance. He slides in the next handful to make an exact dozen, and sends the box down the assembly line.

Alexander, who is blind, performs the quick act again, box after box.

Anyone who's served in the military, worked for the federal government or addressed a package at the post office is familiar with the handiwork. But they might not have realized that all the ubiquitous SKILCRAFT U.S. Government pens were made by the visually impaired. The pens turn 50 this month.

The pen's history traces back to April 20, 1968, when it was introduced to government buyers, said the National Industries for the Blind. The nonprofit organization was tapped to supply pens after another manufacturer made 13 million defective ballpoints in 1967.

The pens have stringent requirements — 16 pages worth. The pens must be able to write a continuous line 1 mile (1.6 kilometers) long and keep the ink flowing despite extreme temperatures — from 40 degrees below zero to 160 degrees (4 to 71 degrees Celsius).

For five decades, the task of making those pens has been entrusted to blind workers.

"It may take us longer to learn it, but once we learn those jobs we do those jobs very well," said Alexander, who supervises about 30 Greensboro pen workers. "And we turn out a top quality garment or writing instrument."

The pen is well-known among military and government families after finding its way into purses and backpacks for years. It's also been used by the military as improvised devices to plug holes in pipes on boats or perform emergency medical procedures.

The pens are sold to the federal government through a program started in 1938 to create jobs for people with disabilities. In 2016, the AbilityOne program sold $3.3 billion in goods and services, with more than half coming from military orders.

Alexander said his 47 years at the North Carolina plant has helped him to buy a home and educate his children. The plant employs about 140 visually impaired people to make products ranging from Army combat jackets to clipboards.

In the pen's heyday, the government bought about 70 million per year. Now the Greensboro plant and a second in Milwaukee combine to produce about 8 million of the flagship retractable ballpoints annually, with parts supplied by a third site in Missouri. All three employ visually impaired workers.

Lynn Larsen, who's worked at Greensboro Industries of the Blind for 40 years, said the job helped her support her family after her father died. More recently, it was a source of pride when her nephew deployed to Afghanistan with the Army.

"He would tell the other soldiers that his aunt Lynn made that pen, and they thought it was real cool," she said.

The Greensboro workers earn well above minimum wage and can reach around $24 per hour, said Richard Oliver, the site's director of community outreach and government relations.

The benefits go beyond the pay, said Oliver, who is legally blind himself: "We didn't get the opportunity to serve in the military ... so this is our way to serve."

"It gives our people a really big sense of pride," he said.

Steven Gray, a retired Navy lieutenant commander, said he read a number of accident reports about the pens being used aboard ships for emergency tracheotomies during a stint at the Naval Safety Center in Norfolk.

"It was an achievement to actually have your pen run out before you lost it," said Gray, who also served at sea on five vessels. "That was something everybody noticed, 'Hey I actually burned through a SKILCRAFT pen this morning.'"