She was angry that the company stopped paying her for videos she posted on the platform. 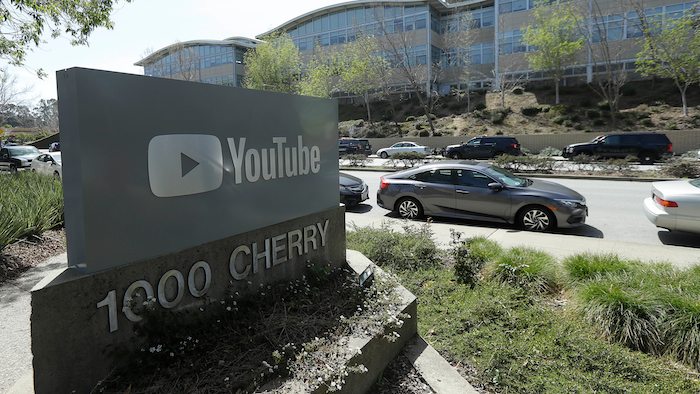 A YouTube sign is shown across the street from the company's offices in San Bruno, Calif., Tuesday, April 3, 2018. A woman opened fire at YouTube headquarters Tuesday, setting off a panic among employees and wounding several people before fatally shooting herself, police and witnesses said.
AP Photo/Jeff Chiu

SAN BRUNO, Calif. (AP) — A woman who believed she was being suppressed by YouTube and told her family members she "hated" the company opened fire at YouTube's headquarters in California, wounding three people before taking her own life, police said.

Investigators do not believe Nasim Aghdam specifically targeted the three victims when she pulled out a handgun and fired off several rounds in a courtyard at the company's headquarters south of San Francisco on Tuesday, police said.

But a law enforcement official with knowledge of the investigation told The Associated Press that Aghdam had a longstanding dispute with the company. The official, who spoke on condition of anonymity because they were not authorized to discuss the case, said Aghdam used the name "Nasime Sabz" online.

A website in that name decried YouTube's policies and said the company was trying to "suppress" content creators.

"Youtube filtered my channels to keep them from getting views!" one of the messages on the site said. "There is no equal growth opportunity on YOUTUBE or any other video sharing site, your channel will grow if they want to!!!!!"

Aghdam "hated" YouTube and was angry that the company stopped paying her for videos she posted on the platform, her father, Ismail Aghdam, told the Bay Area News Group.

On Monday, he called police to report his daughter missing after she didn't answer the phone for two days and warned officers that she might go to YouTube, he said.

Officers in Mountain View — about 30 miles (48 kilometers) from YouTube's headquarters — found her sleeping in her car in a parking lot around 2 a.m. Tuesday but let her go after she refused to answer their questions. Aghdam didn't appear to be a threat to herself or others, police spokeswoman Katie Nelson said.

Nelson would not say whether officers had been warned that Aghdam might have been headed to YouTube headquarters.

Earlier Tuesday, law enforcement said the shooting was being investigated as a domestic dispute but did not elaborate. It was not immediately clear why police later said the people shot were not specifically targeted.

YouTube employee Dianna Arnspiger said she was on the building's second floor when she heard gunshots, ran to a window and saw the shooter on a patio outside.

"It was a woman and she was firing her gun. And I just said, 'Shooter,' and everybody started running," Arnspiger said.

She and others hid in a conference room for an hour while another employee repeatedly called 911 for updates.

The world's biggest online video website is owned by Silicon Valley giant Google, but company officials said it's a tight-knit community. The headquarters has more than a thousand engineers and other employees in several buildings. Originally built in the late 1990s for the clothing retailer Gap, the campus south of San Francisco is known for its sloped green roof of native grasses.

Inside, Google several years ago famously outfitted the office with a 3-lane red slide for workers to zoom from one story to another.

YouTube CEO Susan Wojcicki said in a tweet the company would "come together to heal as a family."

Zach Vorhies, 37, a senior software engineer at YouTube, said he was at his desk working on the second floor of one of the buildings on the campus when the fire alarm went off.

There was somebody lying nearby on his back with a red stain on his stomach that appeared to be from a bullet wound.

He said he realized it was an active shooter incident when a police officer with an assault rifle came through a security door. He jumped on his skateboard and took off.

Officers discovered one victim with a gunshot wound when they arrived and then found the shooter with what appeared to be a self-inflicted gunshot wound several minutes later, San Bruno Police Chief Ed Barberini said. He said two additional gunshot victims were later located at an adjacent business.