The Falcon rocket blasted off Monday, hoisting a Dragon capsule full of food, experiments and other station goods for NASA. 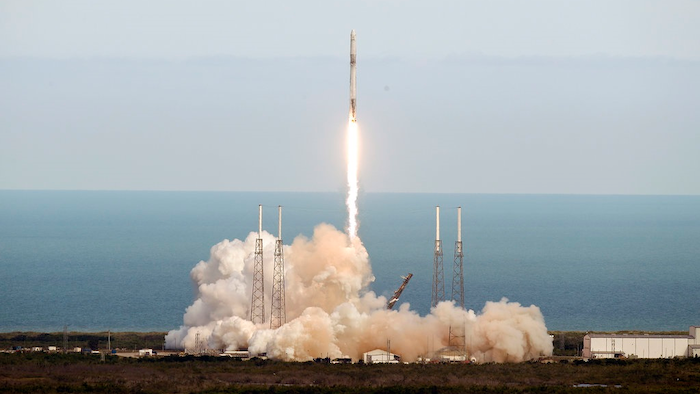 A SpaceX Falcon 9 rocket lifts off from launch complex 40 at the Cape Canaveral Air Force Station in Cape Canaveral, Fla., Monday, April 2, 2018. The spacecraft is on its 14th operational cargo delivery flight to the International Space Station.
AP Photo/John Raoux

CAPE CANAVERAL, Fla. (AP) — SpaceX has launched a used supply ship on a used rocket to the International Space Station.

The Falcon rocket blasted off from Cape Canaveral, Florida, on Monday, hoisting a Dragon capsule full of food, experiments and other station goods for NASA.

The Dragon and its 6,000-pound shipment should reach the space station Wednesday. The station astronauts will use a robot arm to grab it.

It's the second trip to the orbiting lab for this particular Dragon, recycled following a visit two years ago. The Falcon's first-stage booster also flew before — last summer.

SpaceX has combined a recycled Dragon and a recycled Falcon once before. The company aims to reduce launch costs by reusing rocket parts.

The space station is currently home to astronauts from the U.S., Russia and Japan.