The drone passed so close that the crew worried it had been sucked into an engine. 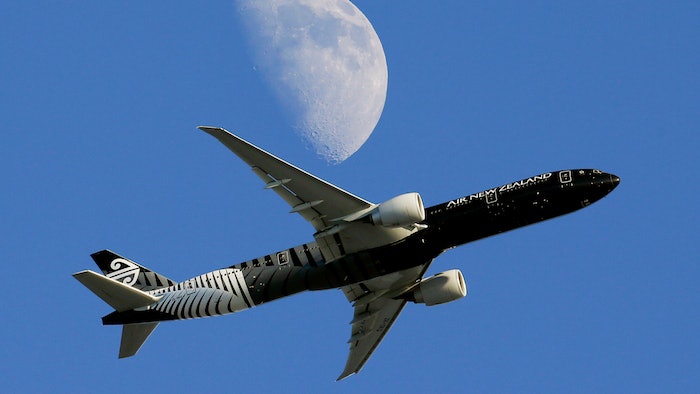 Air New Zealand said a drone came within meters of a flight descending into Auckland Airport from Tokyo, putting the safety of 278 passengers and crew at risk. The national carrier is calling for prison terms for drone operators who endanger lives after the incident Sunday, March 25, 2018.
AP Photo/Nick Ut, File

WELLINGTON, New Zealand (AP) — Air New Zealand said Tuesday that a drone came within meters of a flight descending into Auckland Airport from Tokyo, putting the safety of 278 passengers and crew at risk.

After Sunday's incident, the national carrier is calling for prison terms for drone operators who endanger lives.

Air New Zealand said the pilots of Flight NZ92 spotted the drone about 5 meters (16 feet) from their Boeing 777-200 at a point in their descent when it was impossible to take evasive action.

The airline said the drone passed so close that the crew worried it had been sucked into an engine, although a later inspection showed that hadn't happened.

"It's clear the time has now come for tougher deterrents for reckless drone use around airports to safeguard travelers," David Morgan, the airline's chief operations and integrity standards officer, said in a statement.

He called for penalties to be imposed more consistently and also called for better education around drones.

The airline said it was the second example of reckless drone use this month, after an Air New Zealand pilot reported the presence of a drone within controlled airspace on March 6 at Auckland Airport. That incident prompted the airport to halt all flights for 30 minutes.

Under current regulations, drone operators who breach aviation rules can be fined up to 5,000 New Zealand dollars ($3,600).

"There is no excuse for anyone flying a drone near an airport without authorization or in the flight path of aircraft," Graeme Harris, the director of civil aviation, said in a statement. "Such action is highly irresponsible and is the height of stupidity."

Harris said New Zealand was not alone in trying to grapple with a rapid rise in the use of drones in its skies.