Capturing snowflakes isn't as easy as sticking out your tongue. 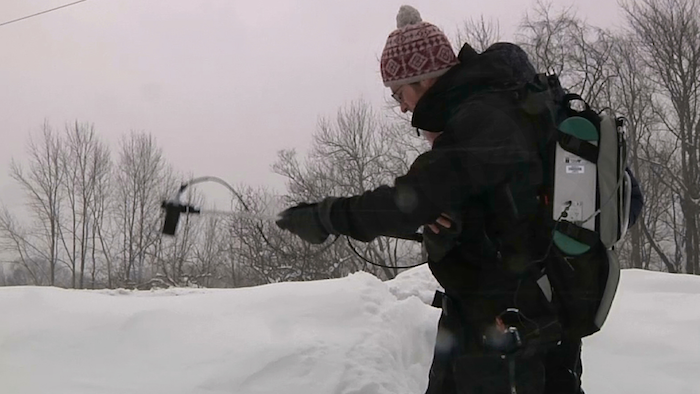 In this March 9, 2018 image taken from video, Patrick Alexander, a postdoctoral researcher at Columbia University's Lamont-Doherty Earth Observatory, uses a spectrometer to measure light radiating off a snowpack in Highmount, N.Y. Researchers are visiting New York’s Catskill Mountains this winter to study details about how snowflakes fall and how they evolve once they settle on the ground.
AP Photo/Michael Hill

HIGHMOUNT, N.Y. (AP) — Capturing snowflakes for scientific study involves isolating the tiniest of crystals on a metal card printed with grid lines and quickly placing them under a microscope to be photographed.

"They are very tiny and they are close to the melting point," Marco Tedesco of Columbia University said as he set up his microscope beside a snowy field. "So as soon as they fall, they will melt."

Tedesco recently led a team of three researchers who trudged through the snowy hills of New York's Catskill Mountains with cameras, brushes, shovels, a drone and a spectrometer to collect the most fine-grained details about freshly fallen snowflakes and how they evolve once they settle to the ground.

That data could be used to provide clues to the changing climate and validate the satellite models used for weather predictions. It also could provide additional information on the snow that falls into New York's City's upstate watershed, flows into reservoirs and fills the faucets of some 9 million people.

"We're talking about sub-millimeter objects," Tedesco said as he stood in shin-deep snow. "Once they get together, they have the power, really, to shape our planet." This is the pilot stage of the "X-Snow" project, which organizers hope will involve dozens of volunteers collecting snowflake samples next winter. The specimens Tedesco spied under his microscope on a recent snowy day displayed more rounded edges and irregularities than the classic crystalline forms. This is characteristic of flakes formed up high in warmer air.

Pictures and video from the drone will be used to create a three-dimensional model of the snow's surface. Postdoctoral researcher Patrick Alexander trudged though the snow with a wand attached to a backpack spectrometer that measured how much sunlight the snow on the ground is reflecting — a factor determining how fast it will melt. Later, Alexander got down on his belly in the field to take infrared pictures of the snow's layers and its grain size.

"There are a lot of things that happen that we can't see with our eyes," said Tedesco, a snow and ice scientist at Columbia's Lamont-Doherty Earth Observatory. "When snow melts and re-freezes, the grains get bigger. And as the grains get bigger the snow absorbs more solar radiation."

Tedesco grew up in southern Italy near Naples and never even saw snow until he was 6 years old. But as a scientist, he has logged time studying ice sheets in Greenland and Antarctica and has studied snow hydrology in the Rockies and the Dolomites. He said snow in the Eastern U.S. has its own character. It tends to be moister than the powdery snow that falls in higher elevation in the West.

Tedesco hopes that a cadre of committed volunteers in the Catskills and the New York City area can take snowflake and snow depth samples next winter. Volunteers won't need an expensive backpack spectrometer, but he recommends a $17 magnifying lens that clips onto their phone, a ruler, a GPS application and a print-out version of the postcard-sized metal card Tedesco uses to examine fresh snowflakes.

Enlisting volunteers to take snowflake photos is novel and potentially useful, said Noah Molotch, director of The Center for Water, Earth Science and Technology at the University of Colorado, Boulder. Molotch, who is not involved in the project, said the pictures will give information about atmospheric conditions and could be useful in the study of climate change.

"Snowflakes are among the most beautiful things in nature," he said. "And the more we can do to document that and get people interested and excited about that, I think is great."