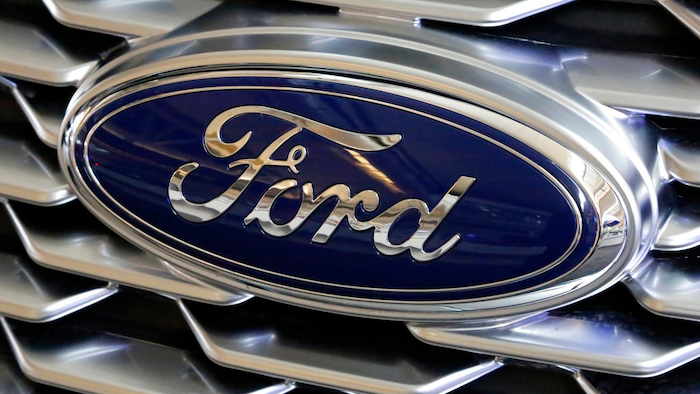 This Feb. 15, 2018, file photo shows a Ford logo on the grill of a 2018 Ford Explorer on display at the Pittsburgh Auto Show. Ford, with a sagging U.S. market share and one of the oldest vehicle lineups in the industry, is promising to revamp three-quarters of its models in the next two years. The move was detailed at a presentation on Thursday, March 15, at Ford's product development center in Dearborn, Mich.
AP Photo/Gene J. Puskar, File

DEARBORN, Mich. (AP) — Ford, with a sagging U.S. market share and one of the oldest vehicle lineups in the industry, is promising to revamp three-quarters of its models in the next two years.

Much of the emphasis will be on refreshing or revamping the entire lineup of SUVs while adding gas-electric hybrid powertrains, two new off-road SUVs and two new trucks.

It's all part of the larger plan to prepare the company for the future by cutting costs, increasing the number of common parts and feeding a long-starved product lineup.

The move, detailed at a presentation on Thursday at Ford's product development center in Dearborn, Michigan, comes at a time when Ford's aging lineup has had trouble appealing to U.S. customers. In the past five years the company's market share has fallen over 2 percentage points to 14.4 percent so far this year. Last year its market share rose 0.1 percentage point.

"I have a reinvigorated view of the future," said Richard Bazzy, who runs a Ford dealership in Pittsburgh's northern suburbs and is among dealers who have been critical of company management. "We've been waiting for a long time. We weren't sure what we were waiting for. Now we know."

Included in the hybrid plan is one for the F-150 pickup, the top-selling vehicle in America, that will offer increased towing power and an on-board generator. Ford pledged to be the hybrid sales leader, unseating Toyota in the U.S. by 2021.

The new products, including complete revamps of the Explorer big SUV and Escape compact SUV, should help dealers who have struggled against competitors with fresher vehicles. Ford concedes its model lineup is among the industry's oldest, with an average age of 5.7 years. It promised to drop that to 3.3 years by 2020.

The Escape small SUV hasn't been completely redone since 2012, while the Explorer was last all-new in 2011, both long cycles compared with competitors.

Among the new product announcements:

— The two off-road vehicles designed to compete with Jeep and Land Rover will be the new Bronco midsize SUV and a yet-to-be named small sport utility.

— A new all-electric SUV with 300 miles of range between charges by 2020. Six more battery electric vehicles by 2022.

— Internet connectivity on all vehicles by the end of next year, enabling over-the-air software updates by 2020.

CEO Jim Hackett, who is approaching one year on the job, said having hybrids in high-volume SUVs will aid performance and help the company and its customers hedge against the possibility of rising fuel prices.

He also promised to speed up new product development in the future.

Ford showed off some of the new vehicles but reporters had to promise not to describe or photograph them. There were no compact cars shown, but Ford says cars are still important.