This limited edition bike from Indian and Jack Daniel's is blacked out and stripped down. 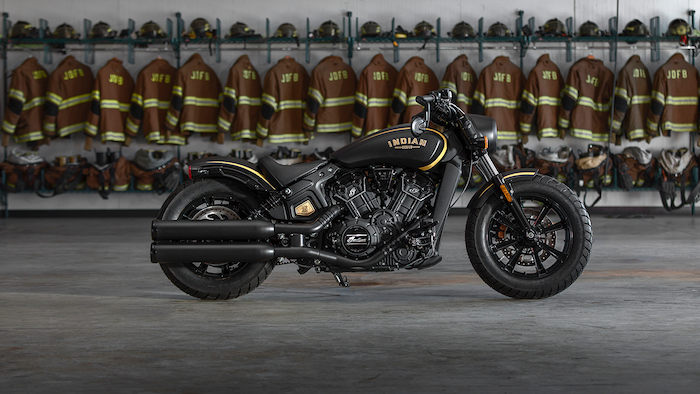 For the third year, the two brands have joined forces with Klock Werks Kustom Cycles of Mitchell, SD to create a limited-edition motorcycle. This year, they looked to the Jack Daniel’s Fire Brigade and its impressive gold and black firetrucks for design inspiration.

Jack Daniel’s is the only distillery in the world with its own fire brigade, which is staffed entirely by employee volunteers.

The employees at Indian Motorcycle share that same passion for their craft and developed this bike as a tribute to the people who are committed to keeping their communities safe, the state-certified firefighters of Jack Daniel’s, as well as firefighters and EMS professionals everywhere.

The bobber maintains the low-slung, blacked-out and stripped-down attitude of the Scout Bobber, but also boasts several custom features. As a nod to the “Old No. 7 Brand”, only 177 of these bikes will be built globally.

The individually-numbered motorcycles are accented with Jack Daniel’s Fire Brigade themes. The bike has subtle two-tone matte black paint, a first for Indian Motorcycle, and is covered in real 24-karat gold graphics on the tank and fenders.

The 24-karat gold carries through to the Fire Brigade emblem on the tank and the “Bottles and Throttles Don’t Mix” emblem on the front fender.

To celebrate the hard work, commitment, and bravery of all firefighters and EMS first responders, Indian Motorcycle and Jack Daniel’s are hosting a sweepstakes only open to these service members.

Each bike will come with a commemorative fireman’s axe, which will be engraved with the owner’s name, motorcycle number (#001-#177) and VIN.

Each bike will be built to order with delivery starting in August 2018.