Election to the NAE is one of the highest professional distinctions for an engineer. 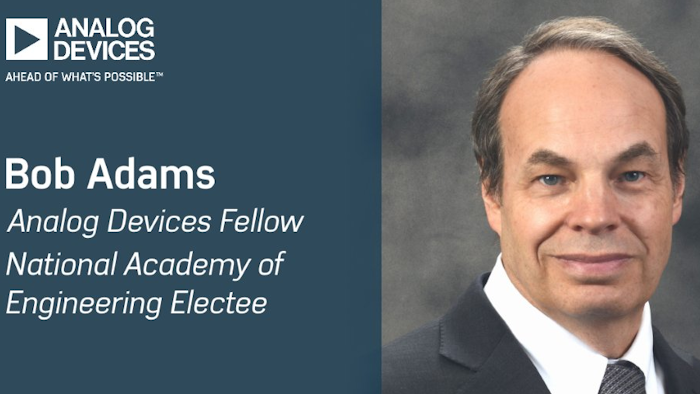 Analog Devices Fellow Bob Adams was elected to the National Academy of Engineering (NAE) for contributions to digital storage and reproduction of high-fidelity audio.

Adams is a Fellow at Analog Garage, ADI’s advanced technology incubator and new business accelerator, where his expertise has led to algorithm and signal processing innovations for healthcare, automotive, and consumer electronics.

Election to the NAE is among the highest professional distinctions accorded to an engineer. Academy membership honors those who have made outstanding contributions to "engineering research, practice, or education, including, where appropriate, significant contributions to the engineering literature" and to "the pioneering of new and developing fields of technology, making major advancements in traditional fields of engineering, or developing/implementing innovative approaches to engineering education."

In addition to this most recent recognition, Adams received the 2016 Industrial Pioneer Award from the IEEE (Institute of Electrical and Electronics Engineers) Circuits and Systems Society, and the 2015 IEEE Pederson Award.

He is also an IEEE Fellow and an Audio Engineering Society Fellow.