Americans Save Energy by Staying Home 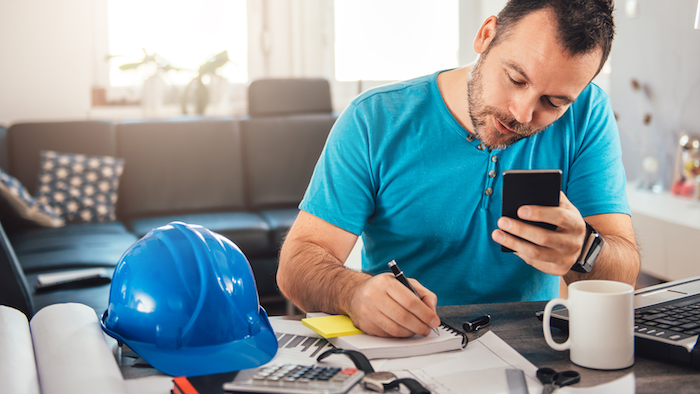 Information and communication technologies are radically transforming modern lifestyles. They are redefining our concept of “space” by turning homes and coffee shops into workspaces. (This article was written in a coffee shop.)

Instead of going to the theater, many people sit in the comfort of their homes and stream movies. Online purchasing of food, groceries and consumer products has transformed shopping. Personal interactions, from the casual to the intimate, are increasingly virtual instead of face to face.

How can we measure the impacts of these changes? Time diaries are one tool for quantifying lifestyles and trends. A time diary is a survey in which people list what they do and for how long, from waking up in the morning to going to bed at night.

Along with our colleague Roger Chen, we analyzed data from 2003-2012 from the American Time Use Survey, which is conducted annually by the U.S. Bureau of Labor Statistics, to gain insights into our digital lifestyle and its effect on national energy use.

Our recently published findings are surprising. Americans spent nearly eight more days at home in 2012 compared to 2003, and even when we allow for displaced energy consumption – such as the electricity required to run server farms – they consumed less energy. This is good news, but it also raises important concerns about making home energy use more efficient. 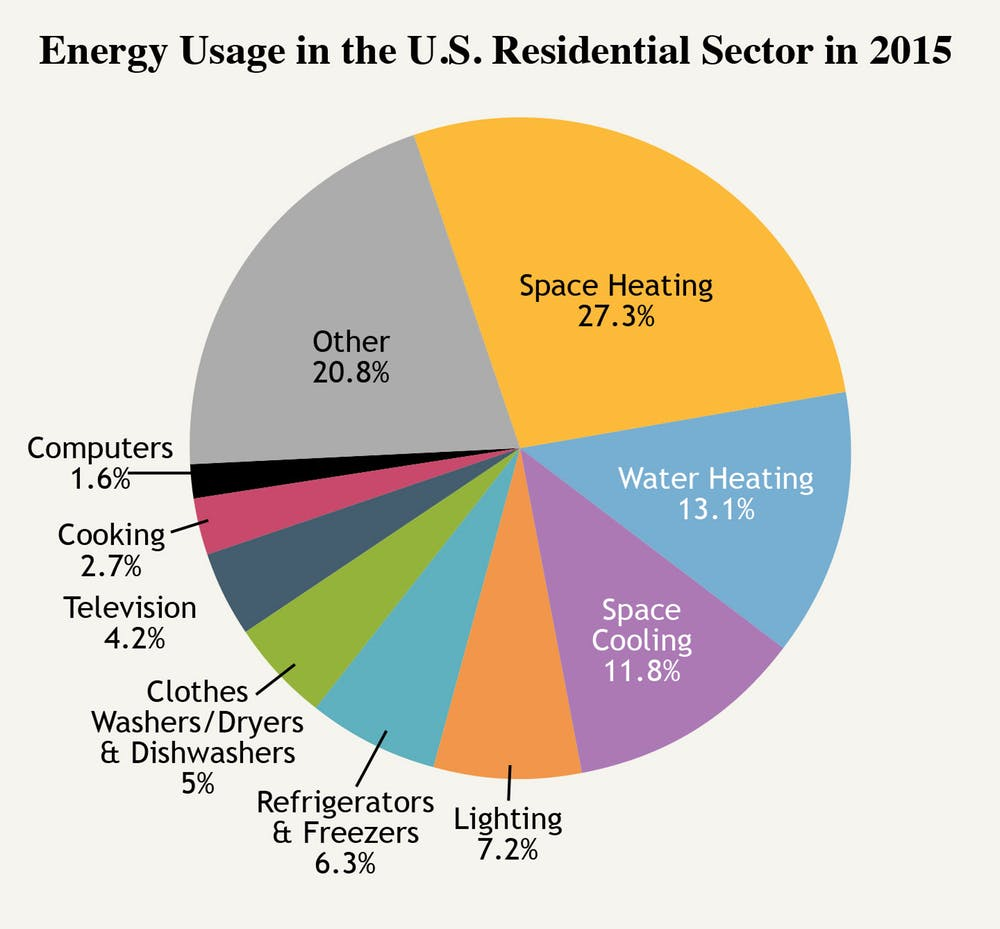 For decades, more than half of all residential energy use went to space heating and cooling. More recently, energy use for appliances, electronics and lighting has increased.NAS

Since there are only 24 hours in a day, any increase in time spent on one activity has to be counterbalanced by an equal decrease in other activities. Thus, extra time at home has to come from decreased time elsewhere. We found that Americans spent 1.2 fewer days traveling and 6.6 fewer days in nonhome buildings in 2012 compared to 2003. Empty movie theaters and malls across the United States anecdotally confirm this trend.

What did people do with all this extra time at home? Some activities were directly linked to digital technologies: working, watching video and using computers. Some were not: Time spent sleeping and preparing and eating meals at home also increased. It is possible that people used the time saved by reduced traveling and shopping to catch up on sleep. We have not, however, disentangled how various factors such as shifts in the labor market and demographics could also shift activities.

The trends we found differed by age group. Americans aged 18 to 24 spent two more weeks at home in 2012 compared to 2003, a change that was 70 percent higher than the general population. This could be due to differences in their job situations, texting friends instead of going out, or other factors.

In contrast, people over age 65 spent less time at home compared to 10 years ago. Presumably this is due to increases in the Social Security retirement age over time and the fact that older Americans are working longer, which results in comparatively more older people in the workplace. 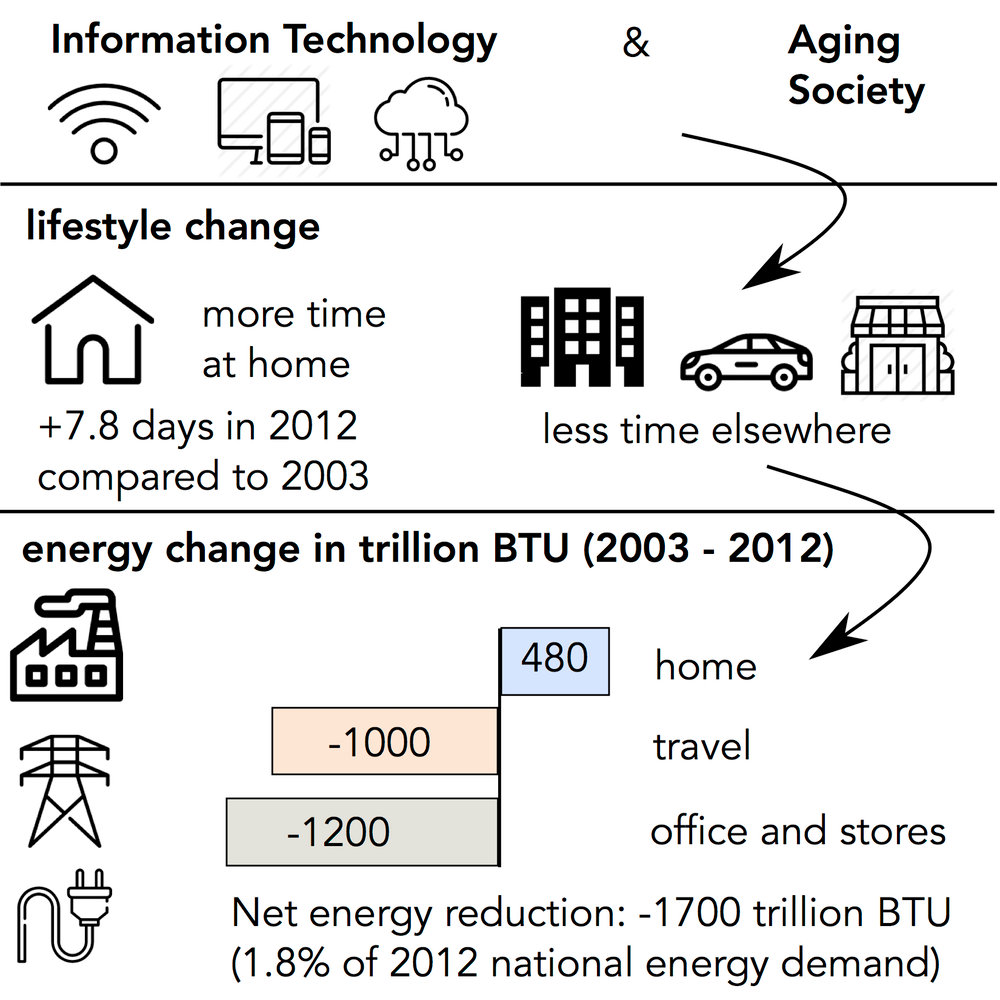 We did this research partly to understand lifestyle changes, but we also wanted to know how these changes affected energy use. Analysts use mathematical methods that attribute changes in energy use to different explanatory factors, such as population, changes in building floor space, efficiency improvements and now, time use. Applying these methods, we found that Americans are saving energy by staying at home.

Nationally, reduction in time spent traveling led to a decrease in energy of 1,200 trillion British thermal units, or Btu, a measure of the heat content of fuel. Reduced time spent in nonhome buildings lowered energy consumption by 1,000 trillion Btu. Energy use did increase at home, but to a comparatively smaller degree – about 480 trillion Btu.

Combining these three shifts, we found a net reduction of –1,700 trillion Btu, or 1.8 percent of national energy demand. A gallon of gasoline contains about 120,000 Btu. So the lower energy consumption translates into 14 billion gallons of gasoline.

While the time reduction in traveling (1.2 days) is much less than the increase in home time (8 days), one minute of car travel is 20 times more energy intensive than time at home, so any reduction saves a lot of energy.

Our analysis did not include some factors. For example, when internet use increases, we know that servers and IT infrastructure consume more energy. While we could not completely account for this, we did find that the increase in energy consumption by all servers in the United States during the period we studied was only about one-seventh of the total savings of 1,700 trillion Btu – not enough to counteract the overall trend. 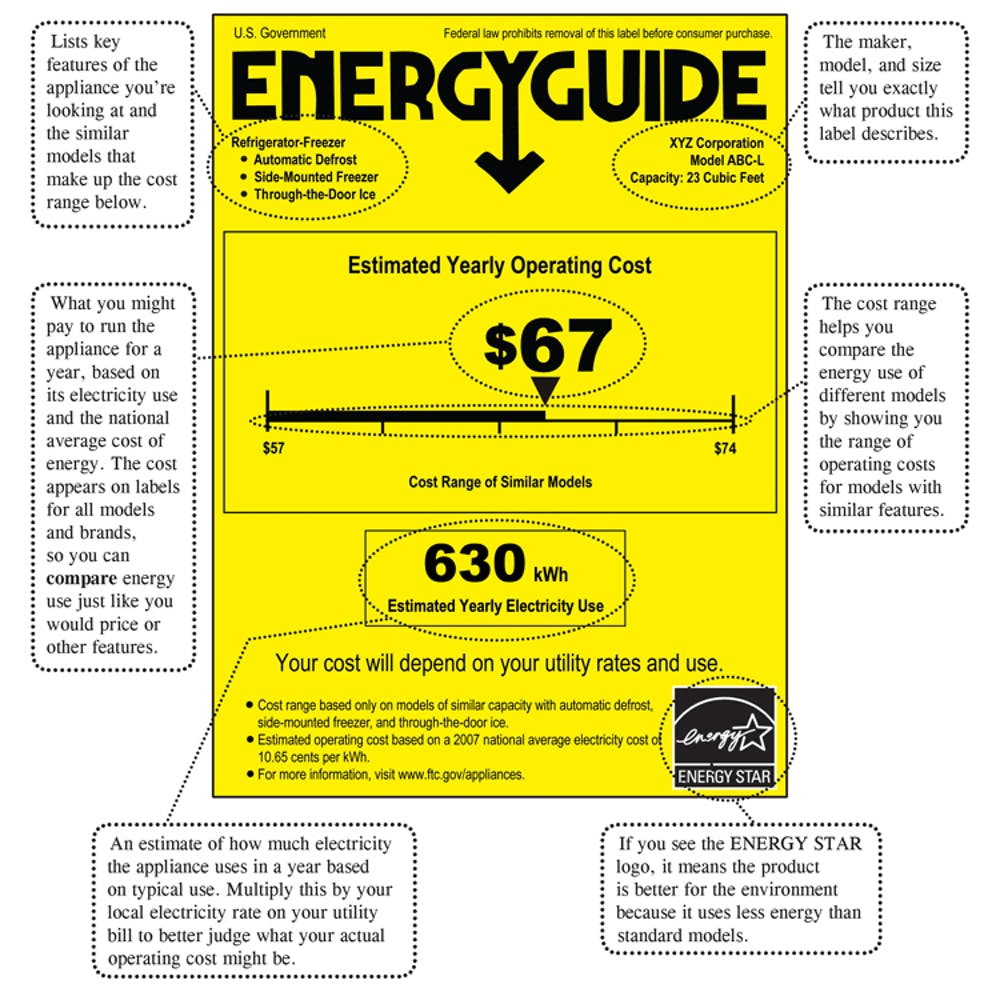 Most appliances sold in the U.S. carry labels that give consumers information about how much energy the devices use.FTC

There are many efforts at the state and federal level to reduce energy demand. The Environmental Protection Agency’s EnergyStar program certifies energy-efficient appliances. The Department of Energy, with input from Congress, develops energy efficiency standards for appliances and equipment. State-run utility commissions typically require utilities to run programs to encourage efficiency, which often provide rebates to consumers who purchase efficient appliances.

The trends we identified suggest that people are going to spend more time at home. This provides motivation for policymakers to increase focus on efficiency programs for homes. Policies such as the Trump administration’s proposed budget cuts to EPA’s EnergyStar program would be moving in the wrong direction when home energy use is becoming more important nationwide.

Time use data could also inform public policy by helping households develop personalized plans for energy efficiency. Currently home energy audits account for factors such as the level of insulation and type of furnace, but usually do not consider how residents’ lifestyle choices affect energy use. We have shown in prior work that at least for televisions, differences in how much people watch leads to huge differences in energy consumption. Awareness of time use can help residents figure out what efficiency actions will save the most energy and money.

Technology will continue to affect our lifestyle choices in ways we cannot imagine. Luckily, time use provides a method to measure these changes and identify opportunities for energy savings.