It's a nearly 15-fold increase over the 350,000 zero-emission vehicles already on California's roads. 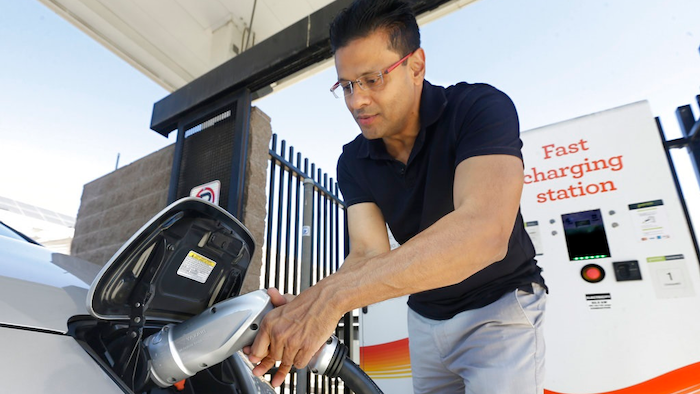 SACRAMENTO, Calif. (AP) — Gov. Jerry Brown outlined a $2.5 billion plan Friday to help Californians buy electric vehicles and expand a network of charging stations as part of a goal of getting 5 million zero-emission cars on the road by 2030.

The ambitious proposal to transform California's car culture comes as Brown begins his final year in office and works to set the stage for his environmental legacy to continue under his successor. The Democratic governor has positioned California as a global leader in fighting climate change amid President Donald Trump's decision to pull the U.S. out of the Paris climate accord.

The number of zero-emission cars is a significant expansion of Brown's goal of selling 1.5 million such vehicles by 2025. It's a nearly 15-fold increase over the 350,000 zero-emission vehicles already on California's roads. The $2.5 billion in spending still needs legislative approval.

Reaching the goal will require that 40 percent of vehicles sold in 2030 be clean, said Mary Nichols, chairwoman of the California Air Resources Board, up from about 5 percent now.

"We think that's a very reasonable proposal," Nichols said. "It's not a stretch."

California offers subsidies of up to $7,000 for the purchase or lease of a new electric, fuel-cell or plug-in hybrid vehicle, though most subsidies are smaller.

Brown's proposal would offer $200 million worth of subsidies in each of the next eight years.

The state has successfully reduced emissions from power plants thanks to the widespread adoption of wind, solar and hydroelectricity, but pollution from transportation has inched up.

Brown proposes using money from a mixture of existing programs at the California Energy Commission and the state's cap-and-trade program, which caps pollution levels and auctions off permits to pollute.

The plan faces a number of obstacles. Consumers have been slow to warm to electric cars, preferring pickup trucks and sport-utility vehicles. And while the number of electric options is growing, automakers and dealers have not aggressively marketed them to consumers, in part because they're not profitable.

Brown administration officials believe demand will increase as the cars become more visible on roadways and people learn more about them.

Democratic Assemblyman Phil Ting of San Francisco also is pushing legislation that would require all new vehicles sold in California to be emission-free by 2040 — a goal that automakers say is unrealistic.