Why Rocket Lab Shot a Glinting Sphere Into Space 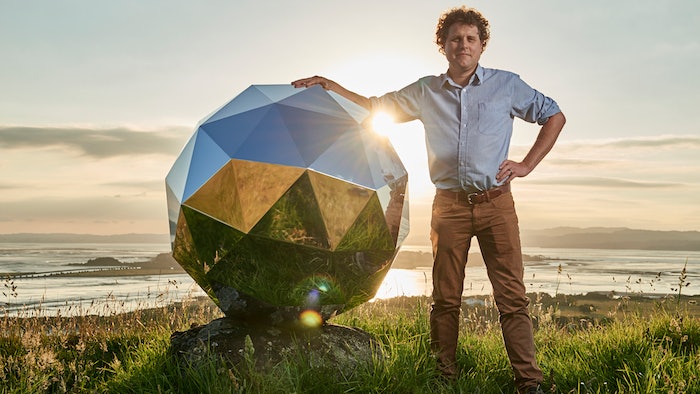 In this Nov. 2017 photo provided by Rocket Lab, Rocket Lab founder and CEO Peter Beck is pictured with his "Humanity Star" in Auckland, New Zealand. Beck, the founder of the company that this week launched the first rocket into orbit from New Zealand said on Wednesday, Jan 24, 2018, that he had deployed a secret satellite he believes will be the brightest object in the night sky and which he hopes will remind people of their precarious place in a vast universe.
Rocket Lab via AP

WELLINGTON, New Zealand (AP) — Look into the night sky at the right time and you might see what seems like a disco ball shimmering and glinting back.

The founder of the company that launched the first rocket into orbit from New Zealand this week said on Wednesday he deployed a secret satellite he believes will be the brightest object in the night sky and which he hopes will remind people of their precarious place in a vast universe.

Peter Beck, the New Zealander who founded California-based Rocket Lab, says he used most of the space aboard his test Electron rocket to house an object he has named the "Humanity Star." The rocket successfully reached orbit on Sunday.

The satellite, not much bigger than a large beach ball, is a geodesic sphere made from carbon-fiber with 65 reflective panels. It is designed to spin rapidly and reflect the sun's light to Earth. It's expected to orbit the Earth every 90 minutes in an elliptical pattern, travelling at 27 times the speed of sound.

"The goal is make people look up and realize they are on a rock in a giant universe," Beck said.

He has lofty ambitions for his experiment. He hopes the satellite will become a focal point for humanity, and will serve as a reminder for people to look past their daily concerns and to face larger challenges like climate change and resource shortages.

That's why Beck said he resisted the comparison to a disco ball, because he wants it to be about something more serious.

"But in all honesty, yes, it's a giant mirror ball," he said.

Beck said the object should be noticeable but will not be much brighter than other stars and satellites and shouldn't be distracting to aviators or stargazers.

The Humanity Star is expected to orbit the Earth for about nine months before it is pulled back into Earth's gravity and burned upon re-entry into the atmosphere. Beck said he is hoping to launch future Humanity Stars, but said the project is his own particular passion and he'll have to wait to see how other people react and also consider whether it's financially viable.

The company says the Humanity Star will be best seen in New Zealand after February and in the U.S. from March due to its changing orbital position. It can be tracked at www.thehumanitystar.com .