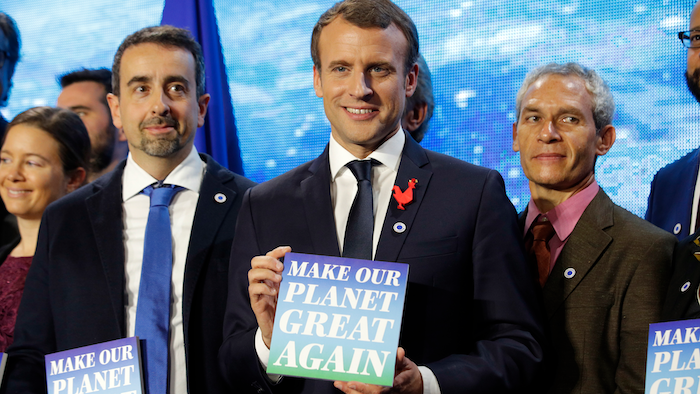 French President Emmanuel Macron, center, attends the "Tech for Planet" event at the "Station F" start up campus ahead of the One Planet Summit in Paris, France, Monday Dec. 11, 2017. It is a dream come true for U.S.-based climate scientists — the offer of all-expenses-paid life in France to advance their research in Europe instead of in the United States under climate skeptic President Donald Trump, two of the winners say.
Philippe Wojazer, Pool via AP

PARIS (AP) — It is a dream come true for U.S.-based climate scientists — the offer of all-expenses-paid life in France to advance their research in Europe instead of in the United States under climate skeptic President Donald Trump, two of the winners say.

American scientist Camille Parmesan and British scientist Benjamin Sanderson are among the 18 initial winners, including 13 based in the U.S., of French President Emmanuel Macron's "Make Our Planet Great Again" climate grants.

Macron congratulated the winners during a brief ceremony in Paris on Monday evening, ahead of a climate summit that gathers more than 50 world leaders in the French capital Tuesday.

In an interview with The Associated Press, Parmesan expressed elation at the prospect of spending the next five years doing her research in France instead of the United States.

A scientist from the University of Texas at Austin, she is a leader in the field on how climate affects wildlife. She lived for a few years in Britain for family reasons and was considering returning to the U.S. until Trump's election.

"He very, very rapidly has been actively trying to erode science in the U.S.A. and in particular climate science," she said. "And it's hard for two reasons: Funding is becoming almost impossible, and in a psychological sense."

Parmesan answered with enthusiasm Macron's appeal for climate researchers to come work in France, minutes after Trump's rejection of the Paris climate accord. "It gave me such a psychological boost, it was so good to have that kind of support, to have the head of state saying I value what you do," she said.

Parmesan, who said she is looking forward to improving her French, will be working at an experimental ecology station in the Pyrenees mountains.

Sanderson, who also worked in the U.S., told the AP that he found it "very reassuring" that France is "openly encouraging climate research."

He said his application was motivated by "the fact that France is making a stand on prioritizing climate change research, but also it's increasingly hard to get research funding in the U.S."

Sanderson used to work at the National Center for Atmospheric Research in Boulder, Colorado, on risks and uncertainties under climate change. For the next few years, he will be living in Toulouse, in southern France, where the country's national meteorological service is based.

France's ministry of Research said the selection of the laureates focused on "scientific excellence and relevance to the call".

"It's very troubling," that researchers feel they need to leave the United States to get needed support for their work, said Chris McEntee, chief executive officer of the American Geophysical Union, an organization of more than 60,000 Earth and space scientists. "Ever since the election there has been fear and anxiety among the scientific community.