A group of major automakers plans to open hundreds of fast-charging stations for electric cars. 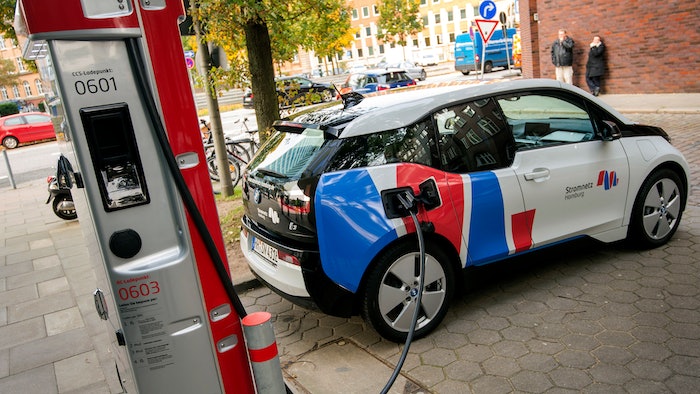 In this Wednesday, Oct. 18, 2017 photo a car is connected to a charging station for electric vehicles in Hamburg, Germany. Major automakers say their joint European electric car recharging network will open its first stations this year in Germany, Austria and Norway in what the companies hope will be a big step toward mass acceptance of battery-powered cars.
Daniel Bockwoldt/dpa via AP, File

FRANKFURT, Germany (AP) — A group of major automakers plans to open hundreds of fast-charging stations for electric cars in Europe in coming years and use a common plug technology in what they hope will be a big step toward mass acceptance of battery-powered vehicles.

BMW, Daimler, Ford and the Volkswagen Group with its Audi and Porsche brands have equal shares in the venture, Ionity, plans for which were first announced last year.

They said Friday that they will open the first of 20 stations this year in Germany, Austria and Norway at 120-kilometer (75-mile) intervals along major roads. They plan to expand the network to more than 100 stations next year and have about 400 in place across Europe by 2020.

The founding companies said "other automotive manufacturers are invited to help expand the network."

The aim is to make it easier for electric cars to travel long distances and render them more appealing to the mass market. Hours-long charging times have meant battery-powered cars are limited to use for short commutes and local shopping trips. Owners typically recharge overnight at home or in an employer's parking lot during the day. That has left battery cars as a second vehicle in some first-adopter households, with a conventional car kept for longer journeys. The chance to charge up fast far from home would make it possible to take an electric vehicle on a family vacation.

A typical electric car can take several hours to charge from empty using a 7 kilowatt-hour home plug. The Ionity network stations by contrast will have charging capacity of up to 350 kilowatts per hour. That's aimed at the future because currently available cars cannot charge at that speed. A BMW i3 electric would take 30 minutes to fast-charge at its maximum of 50 kilowatts per hour; at 350 kilowatts per hour, in theory the time could be cut to under 10 minutes. The hope is, drivers could charge in the time it takes to have a cup of coffee at the recharging station.

The new network will also use a standardized plug — the CCS, or Combined Charging System standard — that isn't tied to any one car maker.

It will set up the stations in partnership with operators of rest areas and gas stations in the three countries.

A pan-European fast-charging network "plays an essential role in establishing a market for electric vehicles," Ionity CEO Michael Hajesch said in a statement.

Uptake of electric cars across Europe has been patchy so far. Electrically chargeable vehicles were only 1.2 percent of European car sales in the second quarter, according to the European Automobile Manufacturers Association. Norway, where the government has aggressively pushed for low-emissions vehicles, is an exception with 29 percent market share for electrically chargeable vehicles. By contrast, Greece registered only 32 rechargeable cars last year.

The higher cost of the vehicles is a key reason, on top of limited range and lack of places to charge up, and for now government subsidies and tax breaks are important to supporting sales. Analysts say that electric vehicles may become more affordable as battery costs fall.

Automakers are sinking billions into developing electric cars in part as a response to ever-tougher limits on air pollution and carbon dioxide, a greenhouse gas blamed for global warming.

The new company will be headquartered in Munich, Germany, and have 50 employees by the start of 2018.