The archives burned to the ground in this month's wildfires. 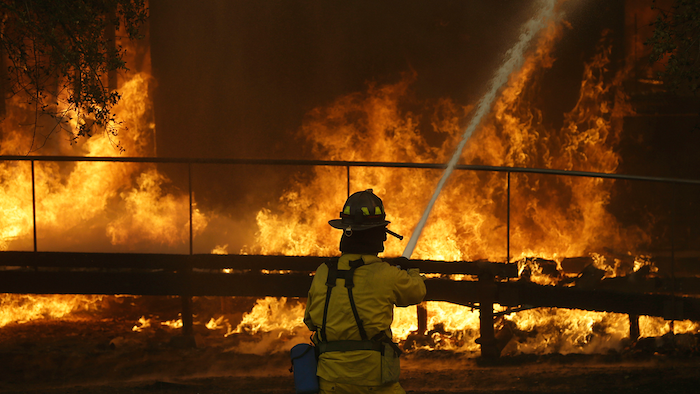 In this Oct. 9, 2017 file photo, a firefighter sprays a hose into a Keysight Technologies building in Santa Rosa, Calif. The Santa Rosa Press Democrat reported that more than 100 boxes of letters and other materials from tech pioneers William Hewlett and David Packard burned in the fires. Electronics firm Keysight Technologies had acquired the archives through spinoffs, and the archives were stored at its offices in Santa Rosa.
AP Photo/Jeff Chiu, file

SANTA ROSA, Calif. (AP) — California's deadly wildfires destroyed much of an archive from tech pioneers William Hewlett and David Packard, such as a decades-old memo in which Hewlett proposes designing a calculator that can fit in his pocket, authorities involved with the archives say.

The more than 100 boxes of letters and other materials from the early days of Hewlett-Packard, now called HP, were stored in two modular buildings at the Santa Rosa offices of Keysight Technologies, an electronics measurement company that acquired the historical trove through a series of spinoffs, the Santa Rosa Press Democrat reported.

The two modular buildings burned to the ground in this month's wildfires , which killed 43 people and destroyed more than 7,000 homes and other structures. The rest of Keysight's campus, including its permanent buildings, survived with minimal damage, Ron Nersesian, the company's chief executive, told the newspaper.

Packard and Hewlett pioneered California's tech industry when they started an electronics firm in a Palo Alto garage with $538 in cash.

The destroyed archives had been valued at nearly $2 million in 2005. Former HP staff archivist Karen Lewis called the collection irreplaceable.

Lewis said the destroyed documents include the memo from Hewlett to engineers that led to the company's HP-35 pocket calculator, in 1972. Another memo proposed an open-office floor plan, now a staple of valley companies, the San Francisco Chronicle said .

Lewis faulted the recent handling of the archives, saying previous owners had stored the collections in vaults within permanent facilities, safeguarded by foam fire retardant.

"This could easily have been prevented, and it's a huge loss," Lewis said.

Keysight Technologies spokesman Jeff Weber said his company had taken "appropriate and responsible steps" to protect the archives, "but the most destructive firestorm in state history prevented efforts to protect portions of the collection."

"This is a time to begin healing, not assigning blame," Weber said.

Another HP spokeswoman, Dana Lengkeek, told the Chronicle that other archive material survives elsewhere, including speeches and letters from the firm's founders.

A group of manufacturing industry leaders are on tap to present.
Oct 18th, 2021
Follow Us
Most Recent