The city where parking meters were born more than eight decades ago is phasing out the last of the coin-gobbling contraptions. 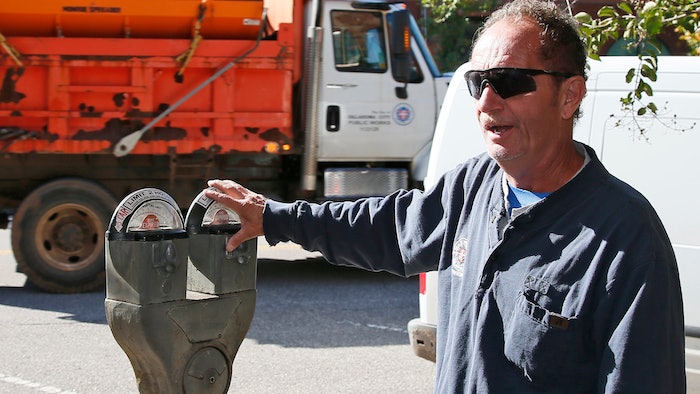 In this Wednesday, Oct. 11, 2017 photo, Wade Beal, parking meter technician, answers a question during an interview in Oklahoma City. The city where parking meters were born says it’s doing away with the last of its ancient, coin-operated models by the end of the year to make way for newer ones. Technology inside Oklahoma City’s old-school meters dated to the 1960s and 1970s, and many companies that once serviced them have long been out of business.
AP Photo/Sue Ogrocki

OKLAHOMA CITY (AP) — The city where parking meters were born more than eight decades ago is phasing out the last of the coin-gobbling contraptions that reshaped America's downtowns in favor of computerized models seen in many other places.

Parking meters came into the picture as the streetcar age gave way to the era of the automobile, remaking urban transportation and the way civic planners and business owners imagined commerce centers for more than three generations. But old-school analogue meters have been disappearing, as cities have been investing in the digital ones that take plastic, along with coins.

The changing technology has meant Oklahoma City's parking meters have been operating on borrowed time. Their guts date to the 1960s and 1970s, and many companies that once serviced them have long been out of business.

This oil-and-gas hub's new solar-powered kiosks feature a "pay-by-plate" system, though it will still have some older models through the end of the year.

Motorists' mostly hate-hate relationship with the parking meter began in 1935, when the first one sprouted here. The collective rage, like most things, worked its way into popular culture.

"It was an iconic opening scene; it was this act of rebellion," says Bob Blackburn, executive director of the Oklahoma Historical Society, where the inaugural Park-O-Meter No. 1 is on display. "That director knew that everyone hated parking meters."

A pain, maybe, but Blackburn said their influence can't be overstated.

"The parking meter is a perfect example of a pivot point on how people got around in American urban areas," he said. "It sparked a renaissance in our inner cities."

As automobiles became more common, downtown traffic jams irked merchants. Store owners complained that most of the cars parked near their storefronts were owned by people who worked downtown, alienating potential customers.

Commerce won out, and the parking meter was born, in part, to keep traffic moving.

Millions of meters began springing up in cities throughout the United States. Cities came to rely on the steady revenue from the meters — and the fines for failing to pay— to pad coffers.

Those fines aren't going away. Nor are Oklahoma City's five meter readers, much to the chagrin of 20-year-old barista Marina Lozano, who says "they're so ruthless."

And not everyone thinks newer is better. Stay-at-home dad Will Cross was hunched over one of the new units on a recent afternoon, trying to find out where his ticket was before the machine finally spit one out.