Mirror-Coating Tech May Cause Dramatic Improvements

Improving the performance of mirrors is all about thin-film materials. 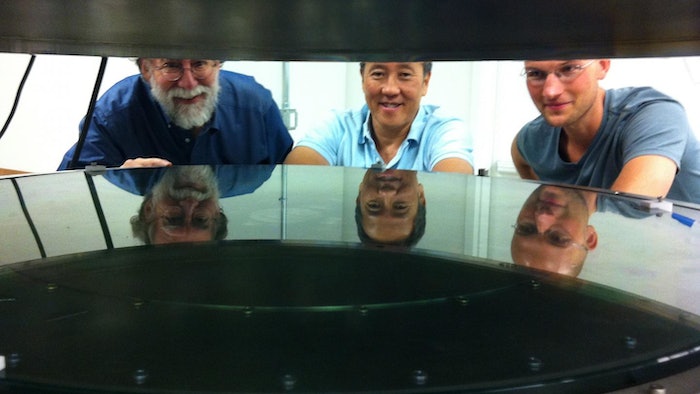 Materials scientist Nobuhiko Kobayashi wasn't quite sure why the astronomer he met at a wine-tasting several years ago was so interested in his research, but as he learned more about telescope mirrors it began to make sense.

"It turns out that improving the performance of mirrors is all about thin-film materials, and that's what I do. So then I got hooked," said Kobayashi, a professor of electrical engineering in the Baskin School of Engineering at UC Santa Cruz.

The astronomer was Joseph Miller, former director of UC Observatories (UCO), whose interest led to a thriving collaboration between Kobayashi and UC Santa Cruz astronomers Andrew Phillips and Michael Bolte. With funding from the National Science Foundation and support from current UCO director Claire Max, the researchers are developing new protective coatings for large silver-based telescope mirrors by adapting a technique widely used in the microelectronics industry.

According to Phillips, most astronomical telescope mirrors use aluminum for the reflective layer, despite the superior reflective properties of silver. "Silver is the most reflective material, but it is finicky to work with, and it tarnishes and corrodes easily," he said. "You need barrier layers on top that can keep anything from getting through to the silver without messing up the optical characteristics of the mirror."

Existing telescopes could substantially increase their efficiency by recoating their mirrors with silver instead of aluminum. "It is by far the cheapest way to make our telescopes effectively bigger," said Bolte. "The reason we want bigger telescopes is to collect more light, so if your mirrors reflect more light it's like making them bigger."

The new coating technology being developed at UC Santa Cruz could make that feasible. The researchers are using a technique called atomic layer deposition (ALD), which gradually builds a thin film of material, one molecular layer at a time, with excellent uniformity, thickness control, and conformity to the surface of the substrate. In a pilot study, ALD provided much better protective coatings for silver mirror samples than traditional physical deposition techniques.

"Atomic layer deposition performs significantly better," Phillips said. "The problem is that the systems used in the electronics industry are designed for silicon wafers, so they're too small for a telescope mirror."

The results of the pilot study, which used an ALD system in Kobayashi's lab designed for microelectronics, convinced the team to design a larger system that could accommodate telescope mirrors. They filed for a patent on their concept and found an equipment vendor willing to work with them to build the system. The vendor, Structured Materials Industries (SMI) in Piscataway, New Jersey, makes thin-film deposition systems for the microelectronics industry.

"We gave them the concept and our requirements, and they did the engineering design work and fabrication," Kobayashi said.

The new system was delivered to his laboratory in July and has performed well in initial testing. The researchers will use the system to demonstrate that it works for telescope mirrors and other large substrates and to continue perfecting the coatings. The system can accommodate a mirror up to 0.9 meter in diameter, and there is no reason the design could not be scaled up to accommodate even larger mirrors or mirror segments, Phillips said. The 10-meter primary mirrors of the twin Keck Telescopes in Hawaii are composed of hexagonal segments 1.8 meters across, and the mirror segments for the Thirty Meter Telescope (TMT) will be 1.4 meters across.

According to Bolte, the desire to use silver on the TMT mirror segments is a major driver of their research on new coating technologies. But he expects the technology will also be used to recoat the mirrors of existing telescopes. An aluminum-coated mirror lasts about three to five years before it needs recoating, a process that puts the telescope temporarily out of action.

"We hate to lose telescope time, and we lose a lot of nights recoating segments at Keck," Phillips said. "We'd like to have a silver coating that could last five to ten years."

"Right now, it's a hybrid process, but we're following the development of atomic layer deposition for the silver coating as well," Phillips said.

Bolte said the new technology could have a big impact in astronomy, in the same way that the advent of digital detectors to replace photographic plates gave new life to small telescopes throughout the world several decades ago. "This is the last trick we have to make existing telescopes more efficient," he said. "It could really make a big difference."