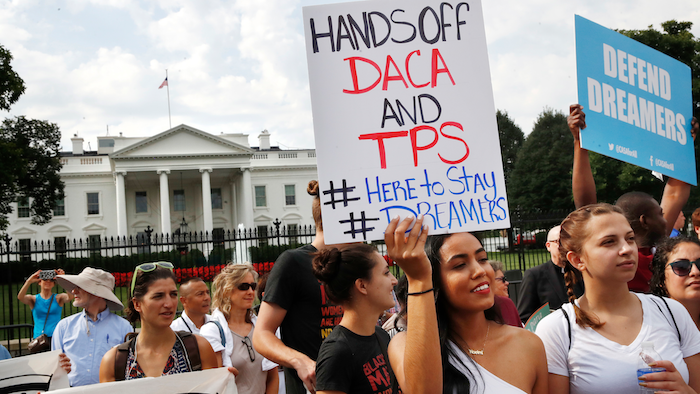 Yurexi Quinones, 24, of Manassas, Va., a college student who is studying social work and a recipient of Deferred Action for Childhood Arrivals, known as DACA, rallies next to Ana Rice, 18, of Manassas, Va., far right, in support of DACA, outside of the White House in Washington, Tuesday, Sept. 5, 2017. President Donald Trump plans to end a program that has protected hundreds of thousands of young immigrants brought into the country illegally as children and call for Congress to find a legislative solution.
AP Photo/Jacquelyn Martin

NEW YORK (AP) — Technology companies and executives of other industries criticized the Trump administration for its plan to undo protections for hundreds of thousands of young immigrants and called on Congress to help them.

President Donald Trump said he will dismantle the Deferred Action for Childhood Arrivals program, or DACA, an Obama-era initiative that allowed young people who were brought into the U.S. illegally as children to work legally in the U.S., shielding them from deportation. Winding down the program could put the immigrants at risk of being sent back to the countries of their birth. The administration says Congress has six months to come up with a fix.

Tech companies have pushed back against efforts to curb immigration, which they see as vital to their industry. Immigrants make up about one-quarter of the U.S. technology and science workforce, and many in Silicon Valley feel a personal connection to the issue.

On Tuesday, Microsoft's president, Brad Smith, said in a blog post that Congress should "move quickly with new legislation to protect these 800,000 Dreamers," using a popular term for the young immigrants. Notably, Smith explicitly urged that immigration legislation take precedence over tax reform, another big legislative priority for corporate America.

Microsoft will also help affected employees with attorneys, amicus briefs and, when appropriate, direct legal intervention. "If Dreamers who are our employees are in court, we will be by their side," Smith wrote. He said there are 39 affected employees that the company knows of.

Facebook CEO Mark Zuckerberg called the decision "a sad day for our country" in a post , adding that it is "particularly cruel to offer young people the American Dream, encourage them to come out of the shadows and trust our government, and then punish them for it."

Apple CEO Tim Cook said in a note to employees that he was "deeply dismayed that 800,000 Americans — including more than 250 of our Apple coworkers — may soon find themselves cast out of the only country they've ever called home." He said Apple will work with Congress on legislation "that provides permanent protections for all the Dreamers in our country" and that the company will support employees in need.

Uber's chief technology officer, Thuan Pham, who came to the U.S. as a refugee from Vietnam, wrote in an online post that the ride-hailing company will "stand by immigrants who want nothing more than to contribute to our country and pursue the American Dream."

Google CEO Sundar Pichai tweeted that "Dreamers are our neighbors, our friends and our co-workers. This is their home. Congress needs to act now to #DefendDACA. #WithDreamers."

IBM posted a series of tweets supporting legislation to let the young immigrants stay in the U.S. and said that "we stand by our IBM #Dreamers."

Other industries also slammed President Trump's actions Tuesday. Randy Falco, CEO of the company that owns Spanish-language broadcaster Univision, said in a statement that he was "disappointed, to say the least," in the administration's actions Tuesday and that Congress must "fix this mess."

Spanish-language broadcaster Telemundo, owned by Comcast's NBCUniversal, also urged Congress to act and said the young immigrants "are integral to the economy, culture and spirit of our nation."

The CEO of Goldman Sachs spoke out against undoing DACA, tweeting , "I wouldn't deport a kid who was brought here and only knows America. Congress must address." Ford, in a statement, also pushed for legislation to protect the young immigrants. JPMorgan Chase CEO Jamie Dimon said the U.S. should support immigrants who come to "learn" and "work hard."

The U.S. Chamber of Commerce, a business group, said undoing the protections and deporting the young immigrants was "contrary to fundamental American principles and the best interests of our country" and said the administration and Congress must find a legislative solution quickly.