The pilot program will use thermal camera technology. 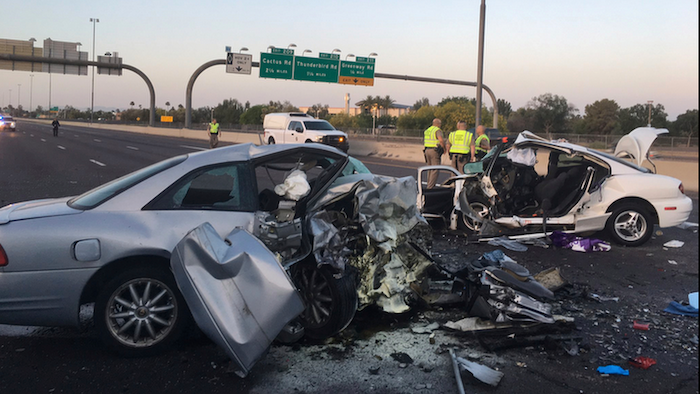 PHOENIX (AP) — Arizona transportation officials are moving forward with a first-in-the-nation pilot program that will use thermal camera technology to curb the wrong-way driving problem plaguing the state.

The detection system will illuminate a sign that notifies the wrong-way driver and alert authorities. Transportation officials will update message boards along the highway, warning other drivers of a wrong-way vehicle.

The technology will be installed on a 15-mile (24-kilometer) stretch of Interstate 17 in Phoenix, along roadways and ramps. It comes after wrong-way drivers have killed at least eight people in Arizona this year.

"I want those cameras implemented as quickly as possible, and expanded to as many areas as possible where they may make a difference and save a life," Ducey said.

The Arizona State Transportation Board unanimously voted Friday to award the contract to Contractors West Inc., a company based in the Phoenix suburb of Mesa that specializes in highway electrical and sign work.

State officials expect the cameras to be installed between the Interstate 10 and Loop 101 interchanges on I-17 by the end of November. Contractors West's bid was about $1.9 million.

Department of Public Safety officials said 956 incidents involving wrong-way drivers have been reported so far this year. More than 80 percent of the drivers are impaired. Most incidents don't result in arrests or crashes because drivers correct themselves, said Alberto Gutier, director of the Governor's Office of Highway Safety.

Transportation officials installed lower and larger "wrong way" and "do not enter" signs on freeway ramps in 2015 in an effort to curb the problem.

Dallas Hammit, a state engineer and deputy director for transportation, said the new program also will help identify the ramps where wrong-way drivers are more prone to enter the freeway.

The system will allow law enforcement to respond to wrong-way driving cases even faster than it already does, Elliott said.

"It really boils down to notification and early word," Elliott said.