GM says it's the first time developers have had access to in-vehicle testing. 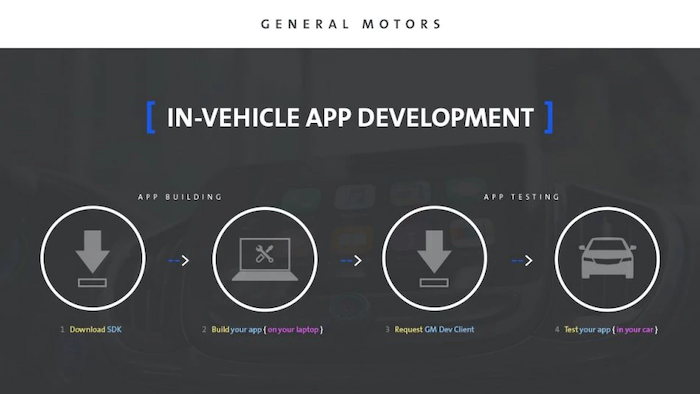 General Motors has launched GM Dev Client, an industry-first app that gives approved developers who have created in-vehicle applications the ability to test them in a real GM vehicle. In-vehicle app testing is the next step for app developers who have already created a proof of concept using GM’s next-generation infotainment software development kit (NGI SDK).

After building an application’s proof of concept with the NGI SDK, the next development step is to conduct real-world testing using a GM vehicle’s infotainment system. GM Dev Client allows partners and developers the ability to test their apps in a GM vehicle once they’ve obtained approval from GM.

In January 2017, GM released the NGI SDK, which mimics real vehicle data and enables developers outside of GM to build apps without making frequent trips to Detroit to conduct testing on infotainment modules.

With GM Dev Client, those apps now can be tested on a real GM vehicle anywhere in the U.S.

By the end of 2017, the NGI SDK will offer templated framework for developers such as a media player layout or a point of interest layout.

Here are step-by-step instructions for in-vehicle app development and testing:

Download the NGI SDK package source from developer.gm.com/ngi (generally in less than a minute, depending on internet connection speed). Install a private node module for a quick set-up process familiar to front-end developers.

Set up your development environment in less than 5 minutes and start utilizing the same APIs available in-vehicle. Use a suite of tools to adjust up to nearly 400 simulated vehicle data points such as network connectivity, location, speed and more.

GM vehicles with compatible infotainment systems can be used for real-world testing. After providing GM with your compatible vehicle’s identification number (VIN), your app will go through GM’s internal review process for suitability. Once approved, the GM Dev Client will appear in the vehicle’s AppShop for download.

Once you download and begin running GM Dev Client, your approved app will appear on the in-vehicle infotainment screen for real-world testing. You can test right from your laptop within the car, as driver lock-out safety features are prebuilt into the GM Dev Client so that only a passenger can test the app while the vehicle is in motion. Conduct on-the-fly code changes and see updates to your app reflected instantly.