Hydraulic engineers use a replica built out of wood, concrete and steel. 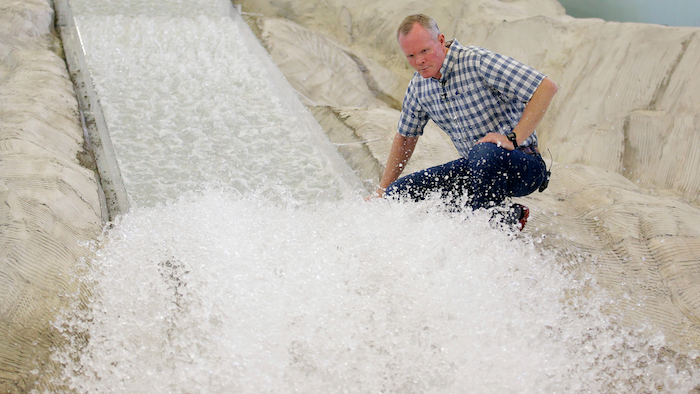 In this Friday, June 16, 2017, photo, hydraulic engineering professor Michael Johnson looks at the water flow on a replica of the Oroville Dam spillway at Utah State University's Water Research Laboratory, in Logan, Utah. California water officials are relying on key hydrology tests being performed on the replica of the spillway to pinpoint what repairs will work best at the tallest dam in the U.S for a spillway that was torn apart in February.
AP Photo/Rick Bowmer

LOGAN, Utah (AP) — Inside a cavernous northern Utah warehouse, hydraulic engineers send water rushing down a replica of a dam built out of wood, concrete and steel — trying to pinpoint what repairs will work best at the tallest dam in the U.S for a spillway torn apart in February during heavy rains that triggered the evacuation of 200,000 people living downstream.

The sound of rushing water is deafening as Utah State University hydraulics engineering professor Michael Johnson kneels in front of the Oroville Dam replica the size of a small house to examine one of two channels that run the width of the spillway to allow air into the water to prevent bubble formations that can damage the concrete spillway of the real dam.

The new channels, called aerators, are one of the key features in the proposed $300 million spillway reconstruction set to be completed by November — when winter rains and snow will once again increase the flow of water into the lake above the dam.

While a separate team of dam experts tries to solve the mystery of why the spillway crumbled last February, the hydrologists who built the replica are using it to guide California authorities on how they should build a new spillway so that it can withstand rushing waters.

Though computer modeling is being used extensively to plan the spillway repairs, California officials and the hydrologists say high tech testing is no replacement for dam replica research. Johnson's team has a $277,000 contract for the work and will issue its final report in the early fall.

"This is an important validation process," Craddock said. "Water behaves very similar at a smaller scale as a larger scale."

Physical models to test proposed dams and dam repairs are necessary because "the flow of water is very complex and momentum is transferred at the molecular level," Johnson said.

"We haven't got enough computer power to model that many molecules at once," he said.

Each simulation of the 100-foot (30-meter) long replica that took 40 days to build begins when a crew member slowly opens a large steering wheel like valve that sends water screaming down a chute modeled after the spillway and crashing into blocks that disperse it and send it in waves to a replica of the river. Johnson almost has to shout for his team to hear him above the noise of the water mimicking a flood.

The hydrologists calculate the velocity of the water, track how much air is being absorbed in the water and document what they see in weekly reports to California authorities.

To help with the design, the separate team investigating the spillway failure sent California water officials and Utah hydrologists a list of factors they've found that could have contributed to the failure — many focusing on the condition of the spillway's concrete, slab joints and foundation. But no one factor has been discovered yet to determine how the failure happened, said John France, a dam engineering consultant leading the California investigation.

Dam experts say one of the most unsettling aspects of the events is that it occurred without warning after decades of maintenance and inspection reports showing no clues of the pending collapse.

California state officials have pointed to the torrents of runoff pouring into the dam at the time of the crisis. But the amount of water streaming down the two flood-release spillways when they began to collapse was relatively small.

The average age of the nearly 91,000 dams in the United States is 56-years-old, according to the American Society of Civil Engineers, and 2,170 of the taller dams are structurally deficient in one way or the other, according to the industry group. So the research in Utah may help improve dam safety elsewhere.

"We have folks across the world who are really looking at what's happening with Oroville," Johnson said