But here's one reason it doesn't always work. 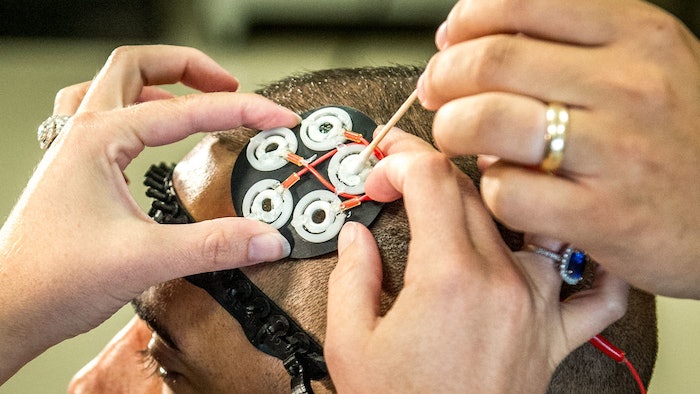 Is electrical pulse to the brain your favorite memory enhancer?
J.M. Eddins Jr.

The first time I heard that shooting electrical currents across your brain can boost learning, I thought it was a joke.

But evidence is mounting. According to a handful of studies, transcranial direct current stimulation (tDCS), the poster child of brain stimulation, is a bona fide cognitive booster: By directly tinkering with the brain’s electrical field, some research has found that tDCS enhances creativity, bolsters spatial and math learning and even language acquisition – sometimes weeks after the initial zap.

For those eager to give their own brains a boost, this is good news. Various communities have sprung up to share tips and tricks on how to test the technique on themselves, often using self-rigged stimulators powered by 9-volt batteries.

Scientists and brain enthusiasts aren’t the only people interested. The military has also been eager to support projects involving brain stimulation with the hope that the technology could one day be used to help soldiers suffering from combat-induced memory loss.

But here’s the catch: The end results are inconsistent at best. While some people swear by the positive effects anecdotally, others report nothing but a nasty scalp burn from the electrodes.

In a meta-analysis covering over 20 studies, a team from Australia found no significant effects of tDCS on memory. Similar disparities pop up for other brain stimulation techniques. It’s not that brain stimulation isn’t doing anything – it just doesn’t seem to be doing something consistently across a diverse population. So what gives?

We all have good days when your brain feels sharp and bad days when the “brain fog” never lifts. This led scientists to wonder: Because electrical stimulation directly regulates the activity of the brain’s neural networks, what if it gives them a boost when they’re faltering, but conversely disrupts their activity when already performing at peak?

In a new study published in “Current Biology,” researchers tested the idea using the most direct type of brain stimulation – electrodes implanted into the brain. Compared to tDCS, which delivers currents through electrodes on the scalp, implanted ones allow much higher precision in controlling which brain region to target and when.

The team collaborated with a precious resource: epilepsy patients who already have electrodes implanted into their hippocampi and surrounding areas. These brain regions are crucial for memories about sequences, spaces and life events. The electrodes serve a double purpose: They both record brain activity and deliver electrical pulses.

The researchers monitored the overall brain activity of 102 epilepsy patients as they memorized 25 lists of a dozen unrelated words and tried to recall them later on.

For each word, the researchers used the corresponding brain activity pattern to train a type of software called a classifier. In this way, for each patient the classifier eventually learned what types of brain activity preceded successfully remembering a word, and what predicted failed recall. Using this method, the scientist objectively classified a “foggy” brain state as the pattern of brain activity that preceded an inability to remember the word, while the pattern of activity common before successfully recalling is characteristic of being on the ball.

Next, in the quarter of patients for whom the classifier performed above chance, the researchers zapped their brains as they memorized and recalled a new list of words. As a control, they also measured memory performance without any stimulation, and the patients were asked whether they could tell when the electrodes were on (they couldn’t).

Here’s what they found: when the zap came before a low, foggy brain state, the patients scored roughly 12 to 13 percent higher than usual on the recall task. But if they were already in a high-performance state, quite the opposite occurred. Then the electrical pulse impaired performance by 15 to 20 percent and disrupted the brain’s encoding activity – that is, actually making memories.

This study is notably different from those before. Rather than indiscriminately zapping the brain, the researchers showed that the brain state at the time of memory encoding determines whether brain stimulation helps or hinders. It’s an invaluable insight for future studies that try to tease apart the effects of brain stimulation on memory.

The next big challenge is to incorporate these findings into brain stimulation trials, preferably using noninvasive technologies. The finding that brain activity can predict recall is promising and builds upon previous research linking brain states to successful learning. These studies may be leveraged to help design “smart” brain stimulators.

For example: Picture a closed-loop system, where a cap embedded with electrodes measures brain activity using EEG or other methods. Then the data go to a control box to determine the brain state. When the controller detects a low functioning state, it signals the tDCS or other stimulator to give a well-timed zap, thus boosting learning without explicit input from the user.

Of course, many questions remain before such a stimulator becomes reality. What are the optimal number and strength of electrical pulses that best bolster learning? Where should we place the electrodes for best effect? And what about unintended consequences? A previous study found that boosting learning may actually impair a person’s ability to automate that skill – quickly and effortlessly perform it – later on. What other hidden costs of brain stimulation are we missing?

I’m not sure if I’ll ever be comfortable with the idea of zapping my brain. But this new study and the many others sure to follow give me more confidence: If I do take the leap into electrical memory enhancement, it’ll be based on data, not on anecdotes.

This article was originally published on The Conversation. Read the original article here: http://theconversation.com/electrically-stimulating-your-brain-can-boost-memory-but-heres-one-reason-it-doesnt-always-work-77584.